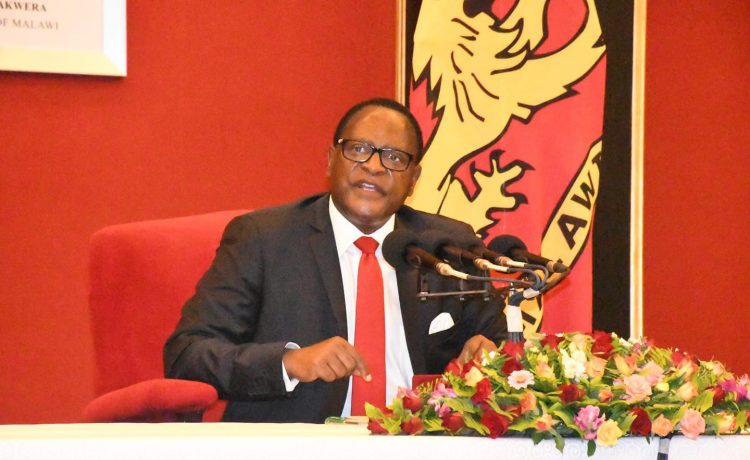 President Dr. Lazarus Chakwera last night directed the Minister of Health Khumbize Kandodo Chiponda to declare a National Health Emergency following the confirmation of an imported case of Polio or Poliomyelitis in one of the country’s districts.

Poliovirus causes irreversible paralysis disease mainly in children zero to fifteen years of age but it also has a potential to infect immunocompromised adults and this is the first polio case to be recorded in Malawi in 30 years, a country with a status as a polio-free nation.

In a press release last night, President Chakwera gave a message of hope to Malawians as the emergency comes at a bad time when the country is still recovering from other disasters while also battling the Covid-19 pandemic.

“I know that this is the last thing any of us would want for our country. We were hit by Cyclones Idai and Kenneth three years ago, hit by COVID-19 two years in a row after that, hit by Tropical Storm Ana in the first month of this year, are bracing for Tropical Storm Dumako to make landfall and hit us tomorrow, and now a case of polio has hit us from foreign soil.

“But I want you to remember that we are a resilient nation and we will rise out of this season of calamity, not only because we are a strong people, but also because we have many friends around the world who are ready to come to our aid, as my time here in Brussels has assured me of. We shall overcome,” said the President.

In the meantime, Minister of Health Khumbize Kandodo Chiponda has also told Malawians that the ministry is acting steadfast to get ahead of the emerging problem.

She went on to say Vaccines are the most effective and available prevention strategy for the disease in addition to improved water and sanitation practices.

“The laboratory results show that this is an imported virus as there is no evidence of community circulation of the virus. The Ministry would like to assure the nation that the situation is under control and would like to encourage the general public to continue observing good personal hygiene practice as we know that the virus is spread through ingestion of contaminated food or water.

“Normally a child would present to a health facility with acute onset of limb weakness which progresses to paralysis. If it is a leg or an arm, it may become relatively smaller(wasted) than the normal body mass and loses function because it is weaker than the rest of the body.

“It is a disabling and life threatening disease. Polio is an infectious disease and can be passed from one person to another through ingestion of food or water which is contaminated with polio virus. The high risk group are those that are unvaccinated or those that have received fewer doses of polio vaccines,” said the minister.

Kandodo Chiponda added that in line with the WHO guidance and the International Health Regulations (IHR), the country is immediately putting in place additional activities in order to contain the situation in the Country.

“The first step is declaring this as a Public Health Emergency. There will be Emergence Operations Committee (EOC) meetings and a risk assessment of the situation will be done with support from our partners such as the WHO. We will also work very closely with our neighboring Countries and diseases know no borders,” she said.

According to the ministry of health, Malawi Government established the National Expanded Programme on Immunization (EPI) in 1979 to deal with vaccine preventable diseases including Polio, Measles and Neonatal Tetanus.