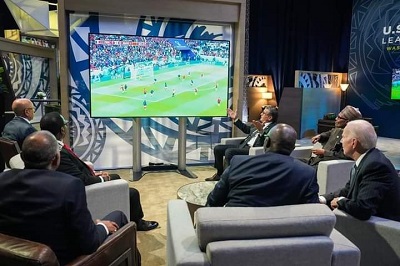 Malawi President Lazarus Chakwera who is in the USA for the USA-Africa summit appears to be enjoying bromance with US President Joel Biden who together with a few other African Presidents were captured watching a World Cup Match involving Morocco and France at the White House.

The Americans are very sensitive when it comes to the optics they sent to the World. For instance, it becomes an anathema for a US President to be near or close to leaders who have no regard for human rights, accountability, and transparency, indeed leaders who are corrupt in their countries.

The picture circulating on social media gives confidence to the President that he might be viewed as one who is doing good governance-wise.

In September this year, the U.S. Secretary of State Antony Blinken and the President of Malawi Lazarus Chakwera signed the Malawi Transport and Land Compact — a $350 million infrastructure grant between the U.S. government’s Millennium Challenge Corporation (MCC) and the Government of Malawi.

During the signing ceremony, MCC Chief Executive Officer Alice Albright and the Malawi Minister of Finance and Economic Affairs Sosten Alfred Gwengwe served as signatories for the compact.

“This agreement opens a new chapter in the partnership between the United States and Malawi,” said Secretary Blinken, who is the Chair of MCC’s Board of Directors. “[A partnership] that builds on our close collaboration over decades, our shared democratic values, and the joint vision for a prosperous, stable, resilient Malawi…Malawi will take the lead on putting these plans into action. Like all MCC endeavors, these projects will be transparent, they will be collaborative, and built to meet the highest standards of quality.”

The Malawi Transport and Land Compact, which includes an additional $26.5 million contribution from the Government of Malawi, is designed to reduce transport costs by upgrading more than 300 kilometers of roads to connect farmers to markets and by strengthening the country’s land administration.

“We are proud to continue our longstanding partnership with the Government of Malawi, which will have brought, in total, more than $747 million worth of transformative projects to the country once the infrastructure projects from our latest program are complete,” said Albright.

“All together, MCC’s grant programs in Malawi are expected to benefit more than 12 million people, which is roughly half the total population, while cutting across key sectors such as transportation, power, and agriculture. These investments, coupled with key policy and institutional reforms in the country’s land sector, will facilitate additional private-sector investments and directly benefit Malawi’s greatest resource — arable land.”

Albright added that MCC has invested more than $9 billion with 25 African countries. These investments are expected to benefit more than 90 million people — including 5.3 million Malawians from the new Malawi Transport and Land Compact.

Malawi’s economy has been significantly impacted by the competing crises of global climate change, COVID-19, and the Ukraine/Russia conflict. While conducting a joint analysis of Malawi’s economy, MCC and the Government of Malawi identified the country’s exceptionally high transport costs as a key economic barrier between farms and markets, as well as difficulties with access to land for investment due to uncertain land rights.

The compact’s Increased Land Productivity Project aims to sustainably improve how land is used and managed at the national and sub-national level, including the coordination of land planning, revenue collection and land services. The project also seeks to modernize and increase the effectiveness of property tax management systems that support improved service delivery in Malawi’s four largest cities. The project’s activities will improve the function of land markets while improving overall land value and encouraging private investment.

“This is an historic occasion,” said President Chakwera during the ceremony. “This is a very important program for Malawi, and a testament, not only to the longstanding relation between Malawi and the United States, but also to the progress Malawi has made in recent months to meet the exacting standards of MCC’s scorecard, [and] the policies we have implemented for the advancement of government, economic freedom, democracy, investments, and the fight against corruption.”

“The fight against corruption ensures that investments like MCC’s compact fulfil their intended purpose and yield their intended benefits,” added President Chakwera.

MCC and the Malawi government first partnered in 2004 with a $20.9 million threshold program and again in 2011 with a $350.7 million energy-focused compact. The prior MCC-Malawi compact built the infrastructure Malawi needed to connect to the Southern African Power Pool, expanded access to reliable power through the construction and refurbishment of 22 substations and 367 km of transmission and distribution lines, delivered an additional 12 megawatts of clean energy to the country, and supported the reforms necessary to bring independently-produced power onto the Malawian grid.

“I am most grateful, once again, to the American people and the U.S. government for their partnership in developing Malawi,” said President Chakwera. “Together, we are making strides for everyone’s good.”

Malawians will be anticipating with bated breath what their leader will bring them this time around from this trip.