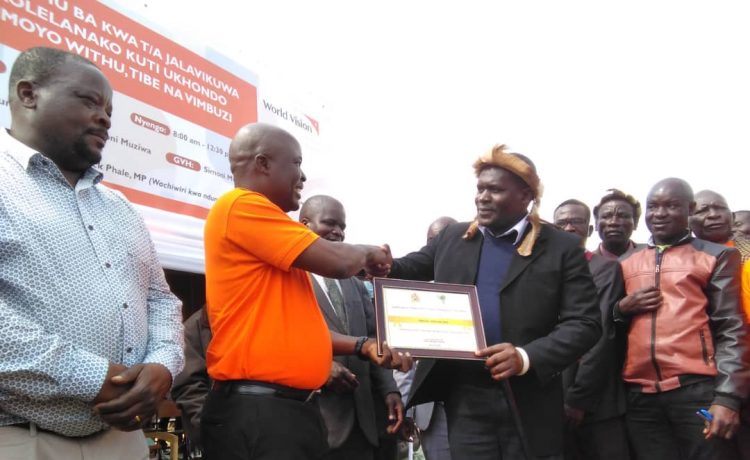 Deputy Minister of Health Enoch Phale hands ODF certificate y TA Jaravikuba of Mzimba
0Share
The Government through the ministry of health says it remains committed to improving sanitation and hygiene as a means of achieving the current Sustainable Development goal number 6.2 by 2030.
SDG 6. 2. urges countries to achieve access to adequate and equitable sanitation and hygiene for all and end open defecation paying attention to the needs of women and girls and those in vulnerable situations.
Deputy Minister of Health Enoch Phale made the reassurance at Thumbi, under Traditional Authority Jaravikuba in Mzimba when the area was celebrating achieving Open Defecation Free status with the help of World Vision Malawi Water, Sanitation and Hygiene (WASH) projects.
According to Phale who was the guest of honor at the ceremony, in achieving SDG 6. 2, it shall improve the health status of all people of Malawi in the long run.
Said Phale; “Government adopted the Community Led Total Sanitation (CLTS) in 2008 with an aim of making the country open defecation free (ODF) by promoting sanitation and hygiene in the communities. Primarily its objective is to reduce sanitation-related diseases.
“Maintaining sanitation and hygiene is central to increasing quality of life and years of healthy life. Globally, 25% of all deaths and 52% of the total disease burden can be attributed to sanitation-related factors.
The Government of Malawi recognizes that promotion of sanitation and hygiene requires collective efforts from all stakeholders by ensuring that the disease transmission route is interrupted.”
He went on to call concerned stakeholders to join government efforts in promoting sanitation and hygiene in the communities so that the disease burden estimated at 52% is reduced to minimal levels.
“Sanitation and hygiene promotion has greatly reduced sanitary-related diseases including Covid-19 and Cholera not only here in Mzimba, but across the whole country.
“Today marks one of the landmark events where we are witnessing the certification of Traditional Authority Jaravikuwa as an open defeacation free area. Congratulations to Traditional Authority Jaravikuwa for attaining this status. Traditional Authority Jaravikuwa joins Hundred and Fifty-Three other traditional authorities in the country who have attained the same ODF status.
“Let me request the leadership of the villages, political leaders, and religious leaders in Mzimba to support the government agenda of making Malawi ODF by the year 2024 by relaying the message of sanitation and hygiene in the communities so that we prevent the occurrence of the diseases that pose high mortality rates in Malawi.
Malawi has, therefore, over the years made some progress by triggering over 73% of the total number of villages for ODF and over 51.9% of the villages attained ODF status,” added the deputy minister.
On his part, Operations Manager at World Vision Charles Chimombo praised people under TA Jaravikuba for showing exemplary conduct to achieve the ODF in just one year since the WASH project was introduced in the area under Njakwa Area Program.
“What is more interesting is that we don’t find a situation like this in many of the areas that we work, these guys have worked hard for it to be declared an open defection free just within a span of one year, which shows they are on the right track going forward and that is because of the way the traditional authority accepted our program.
“The issues of water and sanitation are complimentary you need to have very good sanitation for the water component to make sense. The sanitation project that we are doing here is a basis of our water project,” said Chimombo.
On the success his area has achieved to be awarded the open defecation free status, TA Jaravikuba Munthali has attributed it to a good working relationship that exists between him and the people under his jurisdiction but calls for more support now to supply potable water to his area in addition boreholes currently being done by World Vision Malawi.
According to World Vision Malawi, although 87% of the people of Malawi have access to clean and potable water, a number of challenges especially associated with poor practices in transporting and water storage– still remain and these challenges often result in diarrhea among children under the age of five.
To address this, World Vision is implementing a Water, Sanitation, and Hygiene (WASH) Technical Programme to complement the government’s efforts to ensure communities have access to improved water resources, safe waste disposal, and good hygiene practices.
WASH Technical Programme focuses on the use of Community-Led Total Sanitation (CLTS) and School-Led Total Sanitation (SLTS) approaches.
Tags:Enoch PhaleMalawiMzimba
Share on FacebookShare on Twitter
Editor In-ChiefJuly 22, 2022