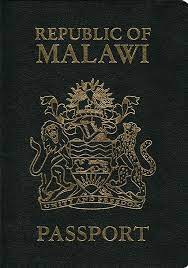 Attorney General (AG) Thabo Chakaka Nyirenda is leaving no stone unturned in his drive to sanitize the government departments.  Ladies and gentlemen, if the former AG (assuming he was performing his duties as such) is a genius then this Thabo is super genius. Having him and iron Lady Martha Chizuma in those sacred offices is bad news to crooked businessperson and corrupt politicians. They are shivering 24/7, I tell you.

Now the news is that Government has terminated the controversial multi billion kwacha contract which was awarded to Techno Brain Global FZE to upgrade passport issuance system and introduce an E-passport. In other words, one of the pipes used by crooks to siphon money from the government has been disjointed.

Attorney General Thabo Chakaka Nyirenda has confirmed a notice for termination of the contract has been served today.

That the contract was a scam, Shire Times already made it clear.

For starters, On 22 March 2019, the Government of Malawi, acting through its Department of Immigration and Citizenship Services entered into a contract with Techno Brain Global FZE in respect of the upgrade of the passport issuance system and introduction of electronic passport under BOT model.

According to the contract, it was agreed that Techno Brain would fund all the initial processes including trainings, meetings, travels as well as production costs as regards deliverables for the printing of passports. The Department of Immigration was supposed to provide project office, physical space, water, electricity, security, the Project Manager and make available staff for designated training sessions.

A Build-Operate-and-Transfer (BOT) agreement is an agreement between the government and an investor in which the investor undertakes construction and financing of a large-scale infrastructure project and operates and maintains it for an agreed period of time and hands it over to government at the end of the period.

BOTs are one of the forms of international investment. BOTs are a means of developing a country’s infrastructure without the Government having to invest public money whilst ensuring that the relevant assets ultimately remain in the public sector. For example, an investor may agree with the Government to build an airport using his money and operate the airport for 10 years during which all revenues from the facility are taken by the investor to recover his invested costs and profit. It is, therefore, incumbent upon the investor to conduct thorough legal due diligence and financial due diligence before embarking on the BOT project.

However, as observed by LordDenning QB, Techno Brain would like to be paid from the income generated by Government. According to the dictates of law, this is a major breach of the BOT investment agreement.

“I have seen the Contract that was entered into between Techno Brain and the Government of Malawi (acting through the Department of Immigration and Citizenship Services) and Techno Brain Global FZE. Under Clause 5 of its General Provisions, the Contracts subjugates itself under the governance of the laws of the Republic of Malawi. Now, according to section 25(3) of the Public-Private Partnership Act (of Malawi), a BOT agreement is one of the modes of private sector involvement in the implementation of public-private partnership arrangement, and section 26(1) of the Act requires that before embarking on a BOT project, there should be an undertaking of a feasibility study to ascertain whether the proposed project is feasible both in economic and legal senses.

“It is abundantly clear, from the reading of the Contract, that the provisions of the Public-Private Partnership Act were completely disregarded in negotiating, and entering into, the contract. An act that is supposed to be performed according to a particular law and the performance of the same has ignored the law makes it an illegal act. In context, this makes the contract illegal. Any contract that is illegal is unenforceable – and that is the clear position of the law,” he added.

In view of the foregoing, it is clear that the former Democratic Progressive Party (DPP) conspired with Techno Brain to defraud government coffers. It is against this background that Shire Times joins patriotic Malawians in lauding the government for terminating this fraudulent contract.

It is not a surprise that Malawians with good frame of mind have welcomed the news as it is a milestone in fighting corruption and thievery in the public sector.

“The good news coming around, yet to be confirmed by relevant authorities, is that Notice of Termination of the Technobrain Passports Contract has been served today under section 46(c) of the Public Procurement and Disposal of Assets Act. Hopefully we can see an end to this egregious debauchery on the soul of the nation,” wrote Lawyer Bright Theu on his facebook page.

Onjezani Kenani had this to say: “Triggering section 46(c) of the Public Procurement Act 2017, Government has terminated the Technobrain contract. It has given Technobrain a 30-day notice. The gyre is beginning to stabilise.”

In September this year, Human Rights Defenders Coalition (HRDC) also argued that the contract was designed in such a way that it favoured Techno Brain Global FZE at the expense of the interests of Malawians.

“In such commercial contracts, the limitation of liability is normally 10 percent of the contract price but Clause 24 of the contract put limitation of liability at USD500,000. In Clause 49, the payments are not linked to the passports issued. There is no performance bond guarantee and there is no advance payment guarantee. This means that payments are due whether the contractor is performing or not,” reads the letter in part.

“There is no provision for liquidated damages in the contract to cover delays by the contractor in the event that the contractor fails or delays in issuing passports during the period of the contract. Contracting pricing in such contracts is normally divided into three parts: Cost of installation and software including licenses, Program management and Cost of each passport issued,” it adds.

HRDC said this would have allowed the Department of Immigration and Citizenship Services to link part 3 to the passports issued and covered the risks of delays.

The coalition emphasized that these were elementary points that Controlling Officers in both the Ministry of Homeland Security and Department of Immigration and Citizenship Services needed to know.

“The Controlling Officers signed this contract as signatory and witness respectively. They failed in their fiduciary duty to safeguard public funds,” observed Trapence and his follow activists.

“HRDC is aware that on 8 October 2020, the World Bank debarred Techno Brain Global FZE in connection with collusive and fraudulent practices in Liberia. Making them ineligible to participate in projects and operations financed by institutions of the World Bank Group. While the contract for electronic passports is not financed by the World Bank, we hold the view that this debarment points to a serious risk of doing business with Techno Brain Global FZE and probably explains why this contract is skewed towards them,”  concluded the letter.