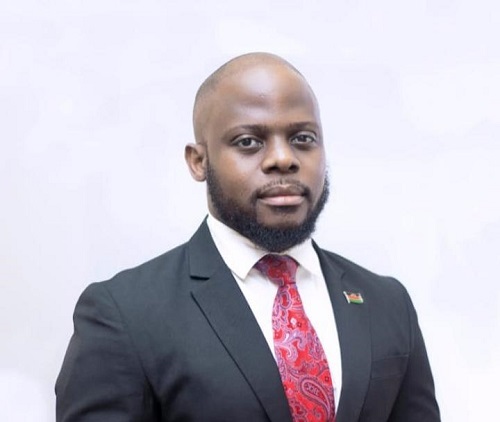 It appears President Lazarus Chakwera is not settling for less as his appointments are of late demonstrating that he wants top qualified Malawians to help him run the government the latest being the appointment of Masauko Edwin Chamkakala who replaced ‘the unsound judgment” and now fired Dr Steve Kayuni as Director of Public Prosecution (DPP).

Chamkakala has an enviable CV  as how this report will elaborately show. The new DPP is a holder of Bachelor of Laws (Honours) from the University of Malawi (2003) and LL.M. in Democratic Governance and Rule of Law (Distinction) obtained at Ohio Northern University College of Law in USA (2009).

He was awarded Outstanding LL.M. Student Award — only one award is given each year — whose criteria include academic excellence, leadership and potential for making significant contribution to the rule of law and democracy in the student’s home country.

Chamkakala worked for the Malawi Revenue Authority, as principal legal officer as well as at the World Bank where he was engaged to assess allegations of misconduct in World Bank-funded projects across Africa of close to US$2 billion to identify allegations warranting further investigations

He has also worked as Project Coordinator for International Anti-Corruption Academy (IACA) in Laxenburg, Austria as management training placement.In the Office of President & Cabinet, he was in the government contracting unit as legal director (2017) where, amongst others he managed legal advisory services for the department and reviewing and vetting all government contracts to ensure their compliance with legal, policy and regulatory framework, including fair trading practices. In particular, he led a team reviewing a road project of approximately US$20 million in which about US$5 million was found to be irregular and not payable.

In the Malawi National Assembly (2006-2009), Chamkakala was the legal counsel serving as special advisor to the Speaker on legal and parliamentary issues, including drafting rulings for the Speaker, Guidance Notes and other legal/parliamentary documents.

He also set up and managed Parliament’s Legal Department and provided legal and parliamentary advice as well as providing secretary services to the Business and other Standing Committees, including ad hoc and inquiry committees established by Parliament.

He analysed and simplified Bills and produced Legislative Digests for MPs’ information of the Bills which are to be tabled in the august House and provided guidance to the Parliamentary Internal Procurement and Disciplinary Committee — amongst many legal duties.

He served as the first Director of Malawi Legal Aid Bureau of which he set it up as a national institution, including setting up administrative structures of the institution across Malawi — and providing its administrative and strategic direction.

The Bureau handled over 10,000 cases for indigenous clients in the first year and he provided financial and administrative oversight in setting up resource mobilization and management of the Legal Aid Fund.

He assisted in networking with local and international institutions in the area of legal aid provision and coordinate the Bureau projects with various international and local organizations of about US$400,000 a year.

He also served in the Independent Consultants in Governance (January-November 2013) where he provided technical assistance to the Legal Affairs Committee of Parliament on the review of laws and policies affecting the independence of Parliament (2016 and 2017).

He reviewed the MoU between National Aids Commission & Anti-Corruption Bureau on Fraud and Corruption Prevention, where a review of over US$1 million grants to various CSOs was undertaken (May 2014 to August 2014)

He provided technical assistance to the Legal Affairs Committee of the Malawi National Assembly on the review of 11 land-related laws and drafting proposals for their amendments and performed a study on the National Integrity System of Malawi (Malawi Economic Justice Network/Transparency International Consultancy; 2012-2013).

He led a team of two consultants performing the Democratic Governance Institutions Mapping exercise for Malawi and provided tax advisory services to Save the Children Fund.

He led a team of four international consultants and two local to perform contract reviews and liability assessment of the Government of South Sudan in relation to the grain procurements of 2008/09 — a StAR Initiative/World Bank Consultancy, field verifications (June 2012).

He also led a team of three international consultants tasked to evaluate the level of liability of the South Sudan government over the claims for payment for the delivery of grain. Reviewed contracts worth close to US$237 million where over 85% of the sum was found to be irregular claims.

At the World Bank in Washington, DC, USA (2009-2011, he was an investigator where he also conducted investigations in the World Bank funded projects on allegations of fraud, corruption and other misconduct under the loan agreements, World Bank guidelines and existing client government laws and regulations.

Amongst others, he also engaged with borrower countries and their governance structures on how to effectively safeguard project resources using their own existing structures and in compliance with the loan agreement and World Bank Guidelines.

At Churchill, Norris & Foster Law Consultants in Lilongwe, he was its  legal practitioner & office manager with a portfolio of over 12 corporate clients with the total business of over US$700,000.

From October 2011 to date, Chamkakala has been part of a team of three international and two local experts who performed audit verification for contracts affected by malpractices contrary to World Bank and Government of Kenya laws and regulations under the Arid Lands Resource Management Project (World Bank Consultancy October-December 2011.

He was part of a five-member team of international consultants tasked to verify the audit findings of the US$120 million project and over 80% of the issues raised in the audit were confirmed.

He had also been part of team of three international experts and performed investigation into allegations of misconduct in the Telecommunication Projects in East Africa (World Bank Consultancy (October-December 2011) — a field investigation in Uganda tasked to analyse allegations of irregularities in telecommunications projects in Eastern Africa, particularly in Uganda, totalling approximately US$70 million.

The new DPP also worked at his alma mater, the Chancellor College (2005-2007) as adjunct lecturer in legal research under Prof. Jo Nkhata and at Malawi Revenue Authority (2004-2006 as principal legal officer, he litigated tax related matters and recovered over US$600 million of tax revenue in 2 years.

He prosecuted tax-related offences with the value of close to US$5 million and amongst many functions, he drafted and/or vetted tax regulations, amendments to tax legislation, and international tax/customs agreements among other legal documents

He also negotiated tax agreements worth millions of dollars with foreign governments; researched and made propositions for amendments to tax legislation to improve the operations of the Authority.

He has authored two publications — ‘Coping with Unwanted Pregnancies; the Gruesome Realities of Backdoor Abortions in Malawi’ published by Lambert Academic Publishing (2012) in Germany and available on Amazon on; https://www.amazon.com/Coping-Unwanted-Pregnancies- Realities-Abortions/dp/365920403X.

He also wrote 72-paged ‘Towards Democratic Consolidation in Malawi; The Effectiveness of the Malawi Electoral Commission in Electoral Administration’ — also published by Lambert Academic Publishing (2012) and available on Amazon on; https://www.amazon.co.uk/Towards- Democratic-Consolidation-Malawi-Administration/dp/365922796X.