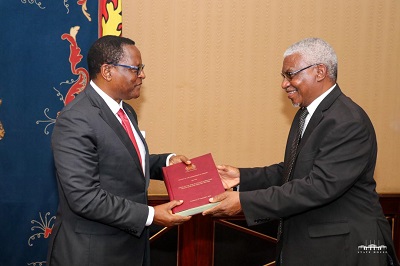 The Malawi leader President Lazarus Chakwera has ordered the Secretary to President and Cabinet, Collen Zamba, to release a report to the Malawi public which has been handed over to him by a commission of inquiry on the arrest of Ms. Martha Chizuma, the Director General of the Anti-Corruption Bureau.

The report was submitted to the President on Tuesday, 3rd January 2023, by the Commission of Inquiry he had instituted 14 working days ago, on 10th December 2022, to establish facts concerning the arrest and make recommendations on corrective actions to be taken for the advancement of his commitment to the fight against corruption.

“During today’s meeting, the Chairperson of the Commission, retired Supreme Court of Appeal Justice Edward Twea, SC, presented the President with a copy of the full report and read out the chapters containing the Commission’s findings and recommendations,” reads a statement released by Presidential Press Secretary Antony Kasunda.

Kasunda further stated in the statement that “On this, President Chakwera has since directed the Secretary to the President and Cabinet to release the findings and recommendations to the public, and will soon give further orders and take further actions upon consideration of both the short and long term recommendations made to him.”