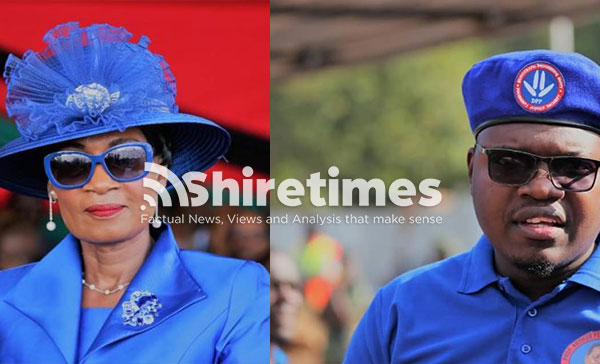 One wonders why some mortals are yet to be arrested after being evidentiary suspected to have indulged in clandestine activities, defrauding the state billions of kwachas which could have been better utilised in some development projects. With reference to the title of the story, former first Lady, Gertrude Mutharika and her son, Tadikira Mafubza Mutharika, are suspected to have stolen huge state funds and externalised the same to Dubai and the United Kingdom among other countries.

There is proof that Tadikila and his mother Gertrude own a Dubai-based ghost company, they named it Black and Veach. This company has been enjoying government contracts using their political status. One notable deal from government was a lucrative contract worth a whooping Mk8 billion. They were to provide technical support, supervision and management of Kam’mwamba Coal fired Power Generation in Neno District.

The more disturbing news is that the company doesn’t even appear on the list of registered companies in Malawi, but it was awarded such a big contract. In their furtive attempts to conceal their schemes, the contract was handled at the line ministry’s level, that’s Ministry of Energy instead of following the legally ordained tender protocol for such type of contracts.

Soon after signing the contract, an advance of MK1.4 billion was effected. As a justification, the initial payment was said to be for the procurement of the protective gear. Just imagine, even managers of Kam’mwamba Power Generation company were oblivious of the contract itself.

More embarrassing news regarding the legal existence of company was uncovered when the Director of Public Procurement (PPDA), Elias Hausi, reported that the company was registered in the USA. This information was contrary to what the US Embassy divulged; there was no such company in the US.

This is proof enough that a syndicate was at play in scheming the whole issue. This was simply a well-calculated move to defraud the state.

Using a fleet of other bogus companies, Gertrude Mutharika and her son have been corruptly getting huge contracts from various state companies, Electricity Corporation of Malawi (ESCOM) being at the core.

Conservative estimates indicate that Malawi is losing about 30% of the Gross Domestic Product (GDP) to corruption annually. Imagine how much such colossal amount of funds could have impacted on the lives of the poor Malawians.

It’s painful witnessing that some of the main corruption suspects are yet to be subjected to the long arm of the law. The arrest of the duo is long overdue.

The Tonse Alliance leadership made a commitment of zero-tolerance to corruption because it realizes that corruption is an epidemic that has the power to completely destroy a country’s socio-economic, financial, human and political environment. These succulent promises, if well implemented, will rescue meagre state resources from further plunder. Those that already stole state funds must be made to repay through legal paths.

Tadikila and Gertrude Mutharika took Malawi as their personal farm. They harvested and milked it at will. They satisfied their appetite for wealth. Time is up for them to account for their sins.

Relevant law enforcing agencies must pounce on them, recover the taxpayers as popularly expected. ACB may be overwhelmed due to the numerous corruption-related cases but there is need for it to include the Mutharika’s one in their inventory of cases up for thorough investigations.

Chakwera administration is doing its best in implementing zero-tolerance policy to corruption because it realizes that corruption impacts the economy directly by reducing economic investments, hindering competition, distorting markets and increasing income inequalities.

May all relevant stakeholders pool their effort in the fight against this cancer amidst us.

DISCLAIMER: This article has been written and submitted to Shire Times by Peter Makina. Thus, the contents and views borne in this article are not necessarily those of Shire Times, but the Author.