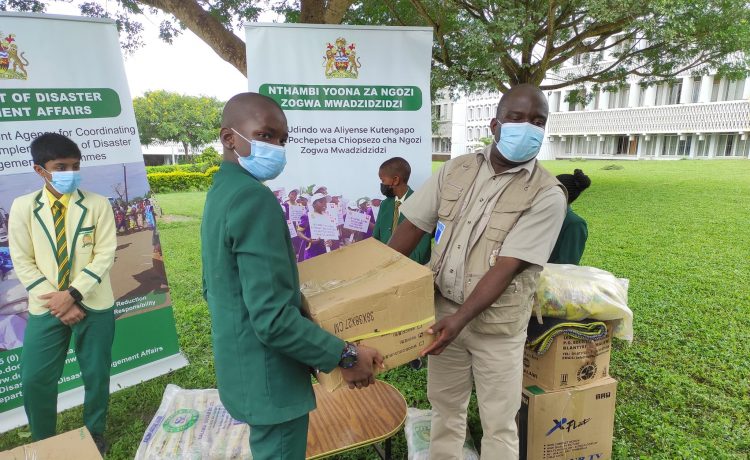 Learners from Sapitwa Presenting the Donation to DODMA
0Share

The Department of Disaster and Management Affairs DODMA has been shot in the arm on its mandate of providing relief items to people affected by Tropical Cyclone Ana after Learners from Sapitwa International Schools in Lilongwe made a donation of assorted relief items to its efforts.

The Donation comes after President Lazarus Chakwera made a plea to different organizations and well-wishers to join hands in assisting vulnerable households that have been affected by floods resulting from the tropical cyclone.

Speaking after making the donation, Ammara Nathoo, who represented the learners said the donation is meant to help the affected people rebuild the livelihoods.

“We express our gratitude to the school management for encouraging us to do this noble duty,” said Nathoo.

On his part the school’s Director Mohamed Alfathe Sama said management encouraged the learners to willingly donate to people affected by floods as one way of teaching them to grow up with the spirit of helping others in times of need.

In his remarks, Director of Disaster Response and Recovery Rev. Moses Chimphepo said the donation will go a long way in assisting the affected people and expressed his gratitude for the students’ noble cause.

“The President declared a state of disaster and made an appeal to all well-wishers to donate in support of efforts government is putting forward to assist the affected.

“For some of us who have visited the affected areas, there are people living in camps and are in need of food and various relief items. They are living in difficult situations. Let me assure you that the department will immediately dispatch these donated items to the affected areas for distribution,” said Chimphepo.