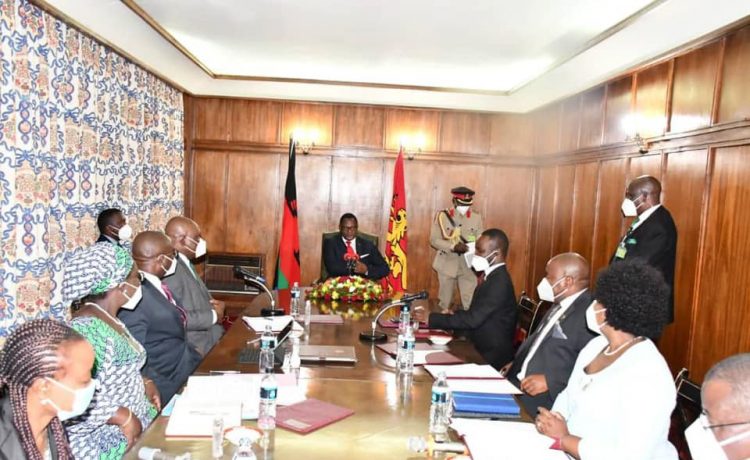 The Presidential Delivery Unit (PDU) which President Lazarus Chakwera launched in October last year has unlocked two important projects which have been stagnant for years.

Chakwera disclosed this at Capital Hill today after meeting PDU authorities and ministers on his first office appearance at the office of President and Cabinet (OPC) since rising to power.

One of the projects, the Confederation of Business Women in Comesa involves the construction of 15 storey twin towers, a 5-star hotel, a business complex with a 520 vehicle capacity car park worth 108 million US Dollars.

The other project is the Nchalo Greenbelt which is estimated to benefit 20, 000 cotton farming households on a total land of 10, 000 Hectares.

Chakwera said the Nchalo project will start by next week while the Comesa project is expected to commence in June this year.

“This morning I was working from the Presidential Delivery Unit (PDU) inside my office at Capital Hill in Lilongwe. When I set up the PDU, my intention was to use it to identify and resolve bottlenecks in government that are delaying the implementation of signature programs and projects of my Administration.

“Towards that end, today I summoned officials from the Ministries of Lands and Trade to resolve administrative obstacles to the construction of a $110 million dollar facility for COMESA, which has had zero progress since Malawi was awarded the project in 2013. Through my intervention, land for the project, which will create 2000 jobs, has been allocated, a title deed for the same has been delivered to COMESA and the two responsible ministries have been given timelines to ensure construction begins this year,” said Chakwera.

He added: “Similarly, I summoned officials from the Ministry of Agriculture and the Greenbelt Authority to make progress on the Nchalo Greenbelt Limited, a project covering 10000 hectares and involving 20000 cotton farmers to be completed by mid next year with an investment of K18 billion. My intervention became necessary to revive the project after 3 years of no production.”

The unit tasked with tracking progress in the implementation of the presidential campaign promises.