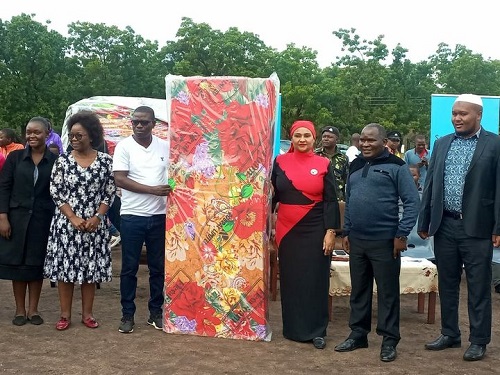 Abida Mia and Elias Abdul Karim, who represent the constituencies of Chikwawa Nkombedzi and Chikwawa South  respectively, joined up with Service Touch to help the students at Ngabu Secondary School by donating 40 mattresses to the school.

The contribution comes in the wake of a fire that destroyed a portion of Ngabu Secondary School on June 20th, leaving only 50 mattresses against the enrolment of over 300 students.

Piason Kachingwe, the primary education advisor for the Ngabu Zone, revealed that the fire originated in the school’s kitchen before moving to the store’s area, where it burned numerous mattresses to ashes.

“About 50 mattresses are now left against an enrolment of 320 students, forcing several of them to sleep on the hard floor”, said Kachingwe.

Service Touch, a prominent corporate player in the nation, has already reacted with 25 mattresses. When Emmanuel Mulele, the chief consulting officer for Service Touch, heard the news, he said that as a way of giving back to the community, they considered lending a helpful hand.

“The mattresses may not be enough but we are telling the students that they must work hard even though they are sleeping on the floor,” said Mulele.

Abida Mia, a lawmaker for the area who also serves as minister of water development, has praised the organization for the gift.

“We are grateful for the donation however as a Parliamentarian for the area the immediate thing I can do is to renovate the kitchen”, said Mia.

Authorities at the school estimate that they will need roughly K9 million to solve the problem. Meanwhile, a group from Chikwawa and Nsanje under the name of Social Economic Trust is now raising money to support the school.