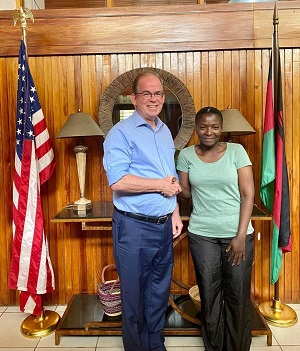 Minister of Justice Titus Mvalo says Martha Chizuma remains the Director of the country’s corruption-busting body, the Anti-Corruption Bureau (ACB). Mvalo said this in Parliament in reacting to the arrests the ACB director was subjected to today before dawn.

In a statement released by the police spokesperson Peter Kalaya, Chizuma who was taken to Namitete Police Station on the outskirt of the capital Lilongwe was charged with ‘making use of speech capable of prejudicing a person against a party to a judicial proceeding which is contrary to section 113(1)(d) of the Penal Code.  The police spokesperson said the Police made the arrest following the complaint made by Director of Public Prosecution (DPP) Steven Kayuni who alleged that he was injured by the ACB Director General in a leaked audio clip in January 2022.

Pressure mounted on the government as all standing orders were waived in Parliament on Tuesday to discuss circumstances leading to the arrest. When news that ACB Director was given bail reached parliament, the lawmakers had to go to Chizuma’s house to stand in solidarity with her. Western diplomats were also enraged with the development and held an emergency meeting with President Lazarus Chakwera. The USA Ambassador David Young later invited Chizuma to express their solidarity with her and the ACB as a whole.

The US Embassy Facebook page posted a picture of the Ambassador with Chizuma with the caption:

“Ambassador Young met with the Anti-Corruption Bureau (ACB) Director General Martha Chizuma this afternoon to convey our solidarity with her and the ACB and our support for Malawi’s ongoing fight against corruption”.

Reacting in Parliament, the Justice Minister made a number of announcements to the effect that President Chakwera had suspended the Director of Public Prosecutions (DPP), Dr. Steven Kayuni, over the “mysterious” arrest of the ACB top boss.

The Minister also assured the Parliamentarians that the charges on Chizuma were withdrawn and that he would be bringing paperwork tomorrow as evidence of the withdrawal and discontinuance of the case.

The Justice Minister also told Parliament that Chizuma stays put as ACB director adding that the President had established a commission of inquiry headed by Former Justice of the Supreme Court Edward Twea and former Inspector General of Police Lot Dzonzi.