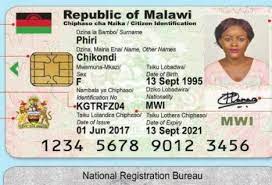 Malawians in Lilongwe have given the National Registration a thumbs down following the delayed processing of the National Identify Cards. Shire times investigation has established that the Bureau has not been issuing the cards since last year, 2021.

“I came for data capturing in October 2021 and they told me to collect the ID at the District Commissioner’s office (DC) in January this year but due to other engagements, I came today and this is May 2022 but they still told me that the card is not ready as they stopped producing them,” said one visibly angry woman at the DC’s office.

Another one chipped in:

“I came here to renew my card in April 2021 and they told me to collect it in January.  I have been coming to check and on all those occasions,  they have been telling me that the card is not ready,” said a Kawale based man who as well declined to be named among the group of people who was at the scene to find out the status quo about the cards.

“It’s frustrating that we are not getting the service we paid for. It is not like it is free service, we paid and in return, we are getting this raw deal.”

In response, the representative of the District Council confided in Shire Times that production of the cards is expected to start soon as the only printing machine based at capitol hill has been fixed and is now in operation.

Citizens have questioned the slow pace of delivering such an essential service doubting whether the efforts by Vice President Saulos Chilima of reforming government departments are paying dividends.