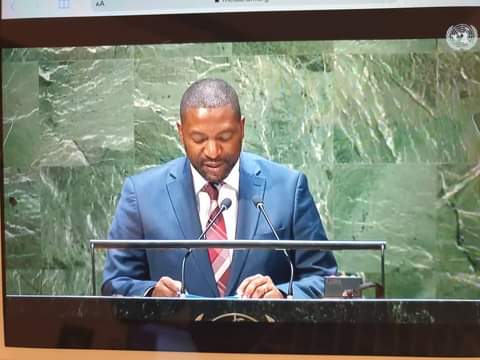 Minister of Lands and Urbanization Sam Kawale says government will soon launch deliberate programs like the slums upgrade as part of its urbanization programs in fulfilling its commitment in the implementation of the United Nations’ (UN) New Urban Agenda.

Kawale made the sentiments yesterday 28th April after presenting a statement on behalf of the African Group of countries during a high-level meeting at the United Nations headquarters in New York, United States of America.

The week long high level meeting is aimed at assessing the implementation of the New Urban Agenda by member states since it was adopted in 2016.

According to Kawale, by adopting the New Urban Agenda, Malawi as a country has been committed to incorporate standards and principles laid out in it in planning and management of urban development in order to achieve sustainable and more livable cities as well as urban centres in the country.

He added that to achieve this, Malawi has been implementing the decent and affordable housing subsidy programme, constructing social protection houses for people with Albinism among other projects.

“These are formulation and implementation of a housing policy, national urban policy, transport master plan, and the Malawi Vision 2063, the national development plan for the country, which has urbanization as one of the pillars, making it a priority for the country,” said Kawale.

In addition to the slums upgrade program, Kawale said government will also soon launch the construction of low cost houses for Malawians.

“Malawi, as a country, is committed to achieve sustainable urbanization and development and strengthening the linkage between the New Urban Agenda and the implementation of the 2063 agenda to attain our national commitments.

“We are experiencing an unprecedented rise of urbanization today, we are at the stage

where we should rethink our strategies and consider our cities as solutions rather than the cause of the problems that we are currently facing,” he added.

Speaking at the same meeting, Executive Director of UN-Habitat Maimunah Sharif said the New Urban Agenda presents a shared global vision for how to build, manage, and live in cities, through urbanization that is well-planned and well-managed.

The New Urban Agenda was adopted by United Nations member states at Habitat III in Quito, Ecuador, on 20 October 2016, and works as an accelerator for the Global Goals particularly Sustainable Development Goal 11, which strives to provide a comprehensive framework to guide and track urbanization around the globe.

The New Urban Agenda is also intended as a resource for different actors in multiple levels of government and for civil society organizations, the private sector and all who reside in urban spaces of the world.