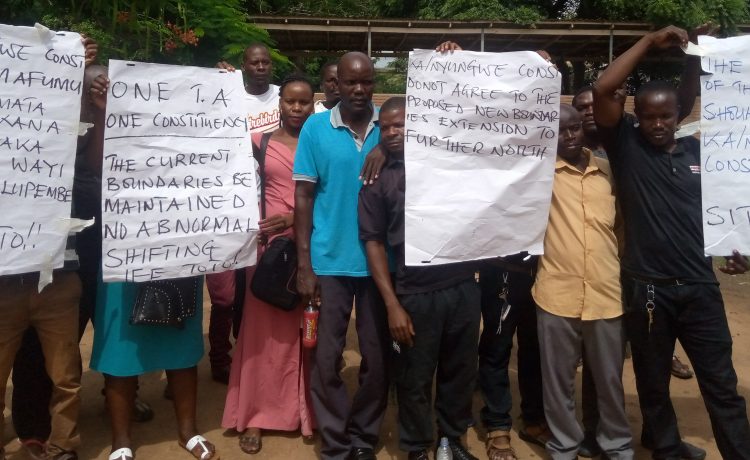 Karonga Nyungwe Constituency concerned citizens on Tuesday took to the streets to demonstrate against the recent demarcation of the Constituency by the Malawi Electoral Commission (MEC).

In a petition purportedly signed by 106 people including group village heads, the concerned citizens argue that the demarcation of the Constituency will have serious boundaries repercussions as it will be the only Constituency to fall under two Traditional Authorities (TAs) and three area development committees (ADCs) to be served by one Member of Parliament.

“According to the Law, we are aware of MEC’s mandate to determine Constituencies boundaries to ensure that Constituencies contain approximately equal number of voters eligible to register based on population density, ease of communication and geographical features.

“In light of the foregoing, we undersigned concerned citizens and permanent residents of Karonga Nyungwe Constituency, urge the Commission through Karonga District Council to seriously consider our concerns as the demarcation exercise is being concluded,” reads part of the petition.

In the petition, the grouping further contends that MEC did not critically consider ease of communication and geographical features when coming up with proposed new boundaries.

In an interview, the group’s representative Benard Chawinga said their argument is based on the fact that a Member of Parliament within the current boundaries where the Constituency falls under two TAs has challenges to sufficiently and effectively serve all corners of the constituency due to geographical features and communication challenges.

“With due respect to cultural diversity, the population within the current boundaries of the Constituency have predominantly common interests as they share a number of features such as culture and language which may be eroded should the proposed new boundaries be approved.

“We, therefore, ask relevant authorities to maintain the old boundaries and that the name of the Constituency should remain Karonga Nyungwe. To this effect we are giving MEC 90 days to work on the anomalies,” he said.

However, in an interview, Karonga District Commissioner who is the district’s constituency demarcation committee chairperson Paul Kalilombe said the exercise is still in progress and the door is open for views and suggestions on how best to implement the project successfully.

He said: “As a committee mandated by the country’s Pollster, MEC, we are still receiving views and suggestions from key stakeholders such as traditional leaders and voters themselves. Therefore, this concern will be treated as such and recommendations will be made so that at the end of the day we have a win-win situation.”