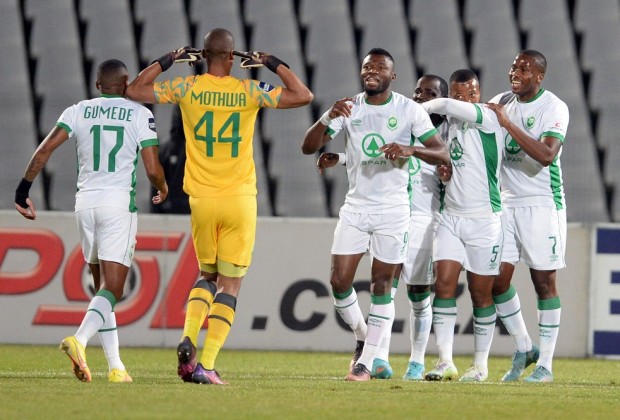 Amazulu FC players celebrating one of their goals
0Share

The former Orlando Pirates striker, who was being sidelined at his former club despite enjoying good form at the African Cup of Nations (AFCON), broke the deadlock on 24 minutes with a composed lob over shot-stopper Thakasani Mbanjwa after a fine pass over the defence by Keagan Buchanan.

The Birds handed a debut to new signing Keegan Allan but were without captain Wandisile Letlabika, while Usuthu were unchanged from their win over Cape Town City.

There was a flurry of chances in the opening exchanges as Swallows striker Waseem Isaacs was denied the opener by goalkeeper Veli Mothwa from a one-on-one situation.

Mhango also came close to getting the opener for the visitors with a strike in the box that missed the top corner by a whisker after an audacious back-heel by Kwem in the box.

Swallows were on the back foot after conceding the goal but they managed to get back into the game on the stroke of halftime after Mothwa could not keep out an improvised header by Allan, who opened his account for the season.

The sides were evenly matched early in the second stanza but Lindokuhle Mtshali had a chance to give the hosts the lead ten minutes in with a free-kick from the edge of the box that was smothered in top corner by Mothwa.

Swallows gained confidence after that and were awarded a penalty on 65 minutes after Abbubaker Mobara was adjudged to have brought down Lindokuhle Mtshali in the box, much to the annoyance of the Usuthu stars. Allan took responsibility and calmly sent Mothwa the wrong way to complete his brace.

Brandon Truter responded with a triple substitution to refresh the team in the last quarter of an hour, as Dumisani Zuma, Ethan Brooks and Ramahlwe Mphahlele all came on for Kwem, George Maluleka and Mobara.

AmaZulu gained a spring going forward and they restored parity a couple of minutes later after Mbanjwa fumbled a corner by Mhango into his own net.

The game was there for the taking for either side after that and Gumede snatched the winner for Usuthu in the last minute by getting ahead of Mbanjwa and nodding home Riaan Hanamub’s set-piece.

Mhango made history for Malawi football when came off the bench to score his first goal for AmaZulu, as they edged out SuperSport United 2-1 on Wednesday last week.

He became the first Malawian footballer to score for five different teams in the modern era of the Premier Soccer League history in South Africa, according to FarPost publication.

He scored his first goal for Amazulu minutes after replacing Sphesihle Maduna by reacting instinctively to deflect the ball into the net and level matters for Usuthu in the 64th minute.

SuperSport had taken an early lead through Maseko’s goal before the Malawian drew level.

Gabadinho then turned from scorer to provider when he created fellow substitute Bongi Ntuli’s winner later on at Moses Mabhida Stadium in Durban.

It was the 29-year-old Flames man’s first goal in two league games since his switch from Pirates, where he was sidelined before he jumped ship to sign for AmaZulu.