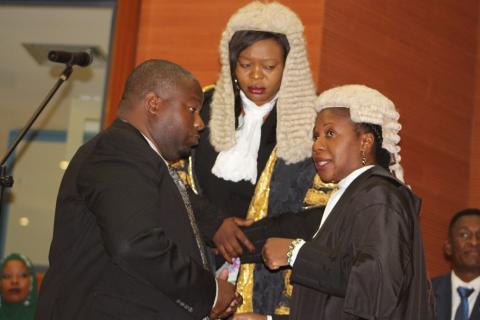 Four Democratic Progressive Party (DPP) lawmakers from the Nankhumwa camp have come in the open distancing themselves from the Court Order that 22 DPP members of Parliament took opposing the shady way in which Dr. George Chaponda was elected as leader of the opposition and effectively maintaining the then status quo where Kondwani Nankhumwa was the leader of the opposition.

The DPP led by octogenarian Peter Mutharika is said to have employed threat tactics to intimidate lawmakers who are backing Nankhumwa into submission to his rule. The efficiency of this strategy has seen four lawmakers namely Noel Lipipa, Dr. Susuwele Banda, Dennis Emuhiye Biscuit Namachekecha, and Mavuto Sandram Scott distancing themselves from the injunction.

Scott told his fellow members on a WhatsApp group that “I write to inform you that I distance myself from the court injunction and also what is happening politically now. I wish you all successful endeavors and I may now seek leave from the group.”

On his part, Noel Lipipa said “I am surprised that my name is appearing on the list. I have pleaded with the Kondwani Nankhumwa to remove my name from the list of members of Parliament who sought the injunction. I was outside the country and I was not contacted on the development.”

There is a vicious battle of annihilation in the erstwhile ruling DPP over control of the head of the opposition with Nankhumwa so far prevailing pending interpartes hearing on 7th July 2022. Drama ensued when Vuwa Kaunda stormed Parliament in her capacity as Chief Whip for the DPP in the Business Committee of Parliament after Nankhumwa sacked him and appointed Honorable Chione in his place. Vuwa Kaunda was not to be acknowledged as Whip but rather Chione, according to the Attorney General’s legal opinion, which was sought to resolve the stand-off. Vuwa Kaunda had to be expelled from the meeting signifying total victory on the part of Nankhumwa camp.