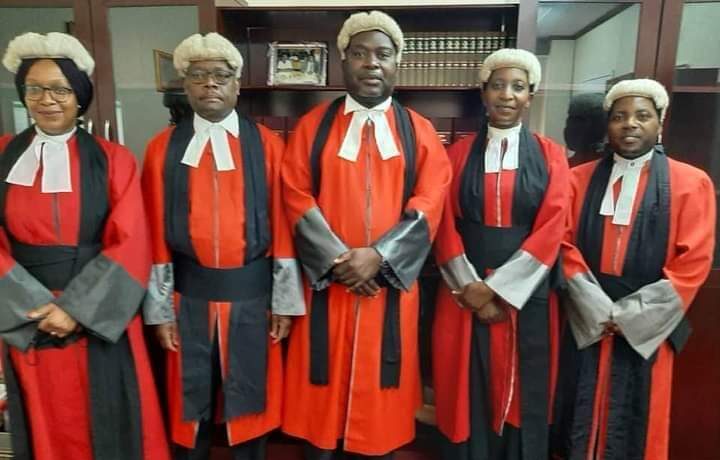 The Constitutional Court – hearing the case in which former ruling Democratic Progressive Party (DPP) wanted the nullification of the election of President Lazarus Chakwera in the June 23 Fresh Presidential Election (FPE) – has dismissed DPP’s petition with costs.

The DPP argued that since the four commissioners were part of the commission that managed the 2020 presidential elections, then the elections cannot be valid.

But Attorney General (AG) Thabo Chakaka Nyirenda wanted the case to be dismissed before the hearing of the main case because, among others, the application by the DPP was not supposed to come before the High Court sitting as a Constitutional Court.

Nyirenda argued that the decision that DPP was challenging emanated from a judgment by a High Court Judge Kenyatta Nyirenda who nullified the appointment of Linda Kunje and Jean Mathanga.

The chief legal advisor to the government also said the case should be dismissed because DPP was not a proper party to challenge the decision.

The AG also argued that DPP created the irregularity on the two Malawi Electoral Commission (MEC) commissioners and said it could not turn and ask the court to reward it for its own irregularities.

And delivering the verdict on Friday, Justices Selvester Kalembera (Judge In-Charge), Rowland Mvundula, Dorothy Nyakaunda Kamanga, Annabel Mtalimanja and Thomson Ligowe, agreed with the AG on several grounds he raised before the court, praying that the case be dismissed

The Court agreed with the AG, saying nullification of Fresh Presidential Election as asked by the DPP will have the effect of having the DPP benefit from its own illegality as status quo in the presidency will revert to the period before the fresh elections.

“We cannot imagine a more classic example of one seeking to benefit from their own illegality than this.

“What we have are illegal nominations by the DPP followed by illegal appointments by the former President who incidentally is also the president of the DPP,” the court said.

“These two issues were addressed simultaneously. The Court in Malawi Congress Party v The President of the Republic of Malawi specifically held that the conduct of the Claimant in nominating more than three names and the appointment of more than three Commissioners representing the Claimant to the Sixth Cohort of the Commission were illegal. The finding is that the principle relief sought by the Claimant, namely, nullification of the results of the FPE 2020 and the subsequent Parliamentary and Local Government by-elections, if granted, would have the effect of benefiting the Claimant from its own illegality, in that the status quo would revert to the pre-FPE 2020 political set up. The preliminary objection is upheld,” the Court ruled.

The court also found that the issues DPP took to the court were already disposed of by the court in Malawi Congress Party (MCP) vs President of Malawi and what was needed after that case was an appeal, not a fresh case as commenced by the DPP.

“We find that it is an abuse of court process for the DPP to bring this application in the manner they have done.

“We have established that this matter is not only an appeal in disguise but also re-litigation. The fact that the DPP is crying out constitutionalism and rule of law does not change the nature of proceedings before us into a constitutional matter and does not compel us to sanction abuse of court process,” the court said.

“The Claimant is trying to re-litigate through the backdoor. In a popular parlance: he is trying to take a second bite at the cherry. This we will not condone.”

“We agree with the Attorney General that this Court cannot allocate to itself powers that have not been conferred upon it by the law.”

The ConCourt further determined that DPP filed the suit incompetently by suing a wrong party.

“Whilst the Attorney General can be sued on account of the actions or omissions of the Government or a public officer, he is not sued in abstract. Since the ‘Office of the President of the Republic of Malawi’ is not a legal person, the Attorney General has been sued in abstract and is therefore a wrong party. The action is futile and the Court upheld the preliminary objection on this issue.”

Before making the final pronouncement the Court shared its observations on the malpractice of forum shopping, also known as judicial tourism, which the Court observed that it happened in the case whereby DPP deliberately took their case to Blantyre High Court instead of Lilongwe where the case started.

The Court, therefore, warned the Claimant against the malpractice.

“In consequence of the foregoing findings the Court had made the following orders: c. The action is struck out in its entirety on account of, inter alia: i. the proceedings being an appeal in disguise; ii. the proceedings being res judicata; iii. the judgment relied upon not constituting a cause of action; iv. a non-existent party being sued; v. the Claimant’s failure to comply with the notice requirement under section 4 of the Civil Procedure (Suits by or against the Government or Public Officers) Act; vi. the Claimant being precluded from benefitting from its own illegality; and vii. the proceedings being frivolous, vexatious and an abuse of the court process.” The Court ordered.

The court then ordered the DPP to pay costs to the Attorney General.

Earlier on the Court also declined to agree with the lawyers representing the opposition Democratic Progressive Party (DPP) in the case that Attorney General Thabo Chakaka Nyirenda did not qualify to represent government because he did not take an oath of office.

The court said the Constitution expressly stated which officers are supposed to take an oath of office and they include the President and Vice President, Cabinet ministers, Members of Parliament and judges and magistrates.

Ligowe proceeded to dismiss the DPP’s argument, arguing the Attorney General properly took office and the oath was not a requirement, making him acceptable into this case.

Commenting on the verdict, one of the DPP’s lead lawyers Charles Mhango said will have to consult their client on the way forward.

“We need to reflect on the judgment and advise our client accordingly. Of course we were taking notes during the delivery of the verdict but we need to read the detailed judgment so that we can come up with an informed decision,” he said.

Chakaka Nyirenda expressed his satisfaction with the judgment, saying that was what everyone was expecting as it was clear that DPP wanted to benefit from its own illegality.

The judgment is in sharp contrast to legal opinion put forward by the recent AG Dr. Chikosa Silungwe who argued that the rescission of the appointment of Mathanga and Kunje was illegal.

Silungwe advised the government to maintain the two although other legal experts said their appointment breached provisions of Section 4 of the Electoral Commission Act. His questionable legal opinions consequently led to his dismissal from the prestigious post.

In June this year, the High Court quashed the appointment of four DPP commissioners Jean Mathanga, Linda Kunje, Steven Duwa and Arthur Nanthuru, saying their appointment was invalid and unconstitutional.

The court acted after the governing Malawi Congress Party had challenged the appointment of the commissioners.

In his ruling, Judge Kenyatta Nyirenda further said the quashing of the appointments did not affect the validity of the June 2020 re-run presidential election.

But the opposition DPP said Nyirenda erred in his ruling because he touched on issues beyond his mandate.