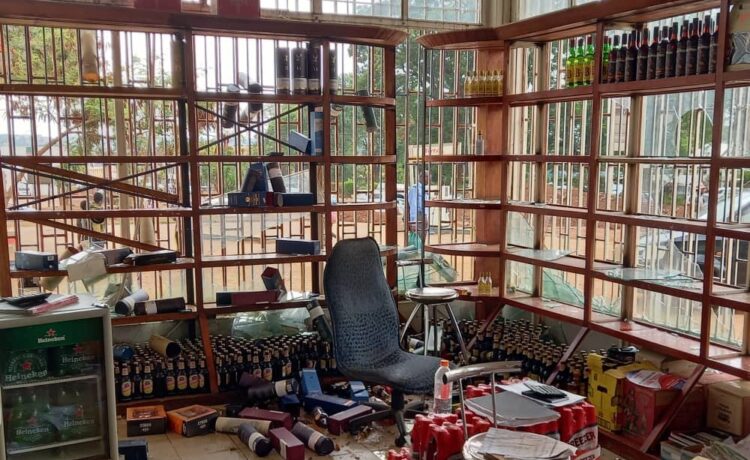 What was expected to be peaceful demonstration turned violent yesterday as protesters destroyed and looted goods worth millions of kwacha belonging to businesspersons in the capital city.

The mayhem also forced shop owners to close their businesses until late in the afternoon especially in Old Town.

The street protests which were led by politician-cum-comedian Bon Kalindo were against the rising cost of living and meant to force the Tonse Alliance administration to bail out poor Malawians from economic misery.

Some of the properties affected included Angoni Liquor Shop and Total Service Station near Lilongwe Hotel.

Running battles ensued between the law enforcers and the protesters as each side kept regrouping and coming back to outdo each other.

Police officers in patrol vehicles and other armoured vehicles were seen forming a cordon in some strategic places like Kamuzu Central Hospital (KCH) Roundabout and near the roundabout along Chilambula Road.

But Kalindo who at one point sought refuge in a moving pick-up vehicle which also carried a public address system, in between the clashes kept joining the marchers on foot and also could be heard urging the crowd not to give up.

Chilambula Road had to be closed temporarily as the marchers and the police clashed forcing motorists to find other routes to their destinations.

In his petition which was received by DC Lawford Lapani, Kalindo gave the Tonse Alliance administration 14 days to start addressing the concerns of Malawians or face more protests.

Kalindo urged government to create a conducive business environment to bring down prices of commodities such as cooking oil, reduce tariffs on water, electricity and tollgate fees, end nepotism and tribalism as well as start fulfilling campaign promises such as creation of one million jobs, among others.

President Lazarus Chakwera has repeatedly said he is aware of the economic hardships Malawians are sailing through, which he attributed to Covid-19 pandemic which has ravaged the whole world.

He, however, said that the government remains committed to resuscitate the economy, saying different measures have been put in place.