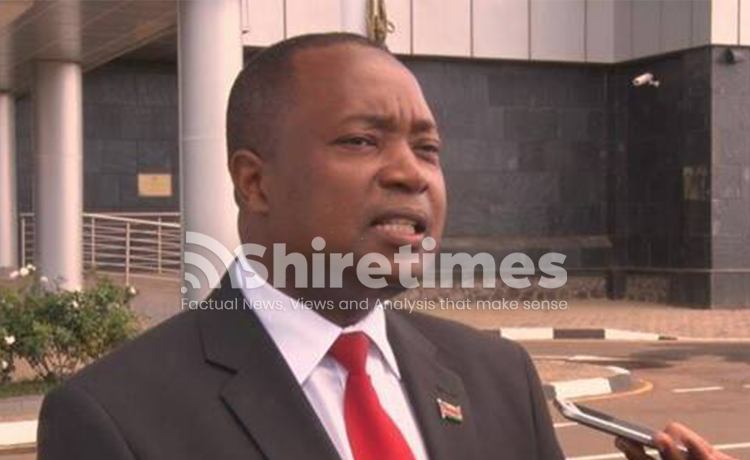 Dr Dalitso Kabambe, the immediate past Governor of the Reserve Bank of Malawi (RBM), is one reputable economist and a revered figure among his professional colleagues. Among his recent credits, stabilising the kwacha and our forex reserves under his Governorship stands out the most. If this was all there was to this man’s resume, I have little doubt that we would still be talking about him today.

But as fate would have it, there is more to the Doctor of economics than just his ability to play around with figures. Of late, we have learnt that he is a politician too. And not just an ordinary politico, but an ambitious one for that matter: He plans to become the president of Malawi and ready to start rolling his chances from 2025 presidential polls. Nothing wrong with that, he has the Constitutional right to do so.

Aside from learning of his colourful ambitions, we are also getting to know what manner of irresponsible man he is. While the man has not said much about his own character, we have greatly benefited from his record as the don of RBM to learn more about it.

The thing is, it is an unquestionable scientific proposition that it is impossible to read a man’s mind, but a very well established and acceptable tradition to judge a man’s conduct in the execution of his affairs, personal or official, so as to consequently understand his mind that is, his motives, his fears, his distastes and such like attributes. Thus, Kabambe’s stay at RBM offered us a rare but vital window to understand his character and judge his suitability to the aspired crown of state presidency.

So, what exactly did he do or omit to do that is worth examining? It would appear that quite a lot actually, that is if the recent Delloite report is anything to go by.

You see; while the Doctor was busy working hard to stabilize the country’s economy and our foreign currency reserves, it appears that he was working even harder to illegally stabilize his very own pockets and those of his political masters through abusing and looting public funds at RBM. While this has long been suspected by many, the Delloite report has finally confirmed the nefarious and clandestine activities that were thriving under his command.

Be ye warned! The report is not for the faint hearted! It is the kind of a chronicle that makes one lose faith in humanity in general. Among others, between January 1 2019 and June 30 2020, the following illicit and dubious transactions were made at the Reserve Bank of Malawi:

As you can see, under the watch of Kabambe, RBM was reduced to nothing more than a “village bank” for the ruling DPP and its conduit entities like FDH Bank, legal firms and other business entities like Mulli Brothers.

And it is worth pointing out that all this was done in clear violation of the Reserve Bank of Malawi Act, therefore constituting to criminal offences for which Kabambe and his fellow players in the syndicate must be prosecuted.

To say that what happened here is immoral is a great understatement, it is a crime against the nation of Malawi. And to have the man who orchestrated, coordinated and benefited from this vulgar plunder say that he would one day like to lead this nation is not only an insult to our collective intelligence and but also to our sensibilities of integrity. In effect, he is requesting us to give him permission to even steal our private parts in future. That is more than dangerous!

This affair encapsulates the tragedy of our times. Here we have a well-educated and experienced energetic man who had the rare opportunity to do right but chose, instead, to use his gifts to inflict pain and misery on the people. Perhaps ‘tragic’ doesn’t even begin to describe it. All the same, it appears that mother nature is on the verge of correcting this injustice.

As I speak now, Kabambe has now been formally charged in connection with these dubious transactions. But while the arrest and subsequent prosecution is good, the recovery of the money misappropriated is even more important and focus shouldn’t be lost on that. The need to recover money lost under these transactions as well personal gains realised by those involved in the scheme cannot be overstated.

Now, when you consider all these factors in their totality, that is to say his role in siphoning government funds to sustain the then ruling clique, you get to understand why Kabambe had a larger-than-life character at RBM. Remember the K30,243,023.16 monthly salary that raised eyebrows a few months ago? How was that even approved without anyone raising an issue? I mean do we really have the Financial Intelligence Agency properly so-called in this country and doing its job?

What settles in my mind against this obscene salary pay-out in a country positioned at the bottom of poverty is the belief that it was a “token of appreciation” for his “efforts” in criminally enriching the then ruling cartel. These efforts included a K4.1 billion night time illegal cash transfer from RBM coffers to the looting cartel via FDH Bank.

And when the new administration showed up on the scene and took steps to correct this madness, we got to learn about the other unpleasant side of Kabambe: He wasted no time in suing RBM. His contention? Unfair dismissal and unfair labour practices to which end he is claiming about K2,389,198, 829 (read as K2.4 billion) and 64 in damages. It is his allegation that his dismissal was contrary to the 2018 RBM Act. My irritated foot!

To properly do justice to this claim, I must belabour to offer a little discussion on section 12(1-3) of the RBM Act, as I hereby do. The provision is coached in the following terms:

(1) The Governor and the Deputy Governor shall each be and appointed by the President, by instrument in writing, for a term of five years.

(2) Upon the expiration of the term for which they are appointed both the Governor and the Deputy Governor shall be eligible for reappointment.

That is the relevant law.

What section 12(1) imports is that once an individual has been appointed Governor, he/she is ordinarily entitled to hold that office for a period of 5 years. And section 12(2), states that upon expiration of the 5-year term, that person SHALL be ELIGIBLE for reappointment. This simply means that whoever was holding that position prior is STILL QUALIFIED for another appointment and not that he is AUTOMATICALLY reappointed. S 12(2) does not import the automatic reappointment of a Governor and the Deputy Governor. Per section 12(1) One can only be appointed by the President and for a period of 5 years. And according to section 12(3), the terms of service applicable at the time of appointment shall remain the same for the remainder of the Governor’s tenure, or the very least, cannot be altered to his/her disadvantage.

And Kabambe’s claim bungles up all issues under this provision. First, it has to be understood that the then administration negotiated a mafia deal with Kabambe. He was getting an unusually and unjustified huge amount of money for such a government institution.

Kabambe was initially working as a PS in the Ministry of Foreign Affairs and International Cooperation (as it was then called). Around April 2017 he was seconded to RBM to as its Governor. He signed a 5-year contract and took office on 21st April 2017. In line with section 12(1) of the RBM Act, his 5-year contract run up until 2022, upon which he would still have been eligible for reappointment by the president, and NOT automatic reappointment by virtual of completing his first 5-year term. This is to say if there was any talk about unfair dismissal or contract renegotiations, the same should have been confined to the executed contract running up to 2022. RBM had not yet into a contract of employment with Kabambe for the 2022-2028 period for him to make any claims stretched to that period. I am made to estimate that his claim is undoubtedly inspired by his belief that his mafia synergies will have it. A totally misguided calculation.

Perhaps before Kabambe even celebrates that he entitled to a claim running up to 2022, here is the bad news for him: The fact remains that Kabambe’s appointment was, but a secondment from civil service. Now, the Malawi Public Service Administration Circular No 15 Ref No PD/4/1/7E/VI/8 provides that the maximum period for secondment of any civil servant should be 36 months (and that translates into 3 years). As long as he was seconded to the Reserve Bank from the Civil Service and his employment remained as such, the 5-year contract may be said to have been signed irregularly hence invalid.

Since following his secondment to the Reserve Bank as a Governor Kabambe did not resign as civil servant, it works to the reinforce the fact that he remained a civil servant under and/or governed by normal terms of secondment. And guess what? Under the conditions of employment governing the civil servant, the government reserves the right to recall anyone from secondment at any time before the expiry of six months. That is to say if Kabambe’s secondment took another fresh 36 months from 2020 when his period expired, assuming that was regular to begin with, then the government remain entitled to recall him any time as it has done. Yes, he was recalled only that he refused to go back to the civil service.

Now, Kabambe claims that he was “unfairly dismissed” and wants compensation for the same. On the facts of the case, he was not dismissed from employment. De-secondment, which he denied to comply with, is not dismissal. since Kabambe was only seconded, he was governed by Malawi Public Service Regulations and that the Reserve Bank Act of Malawi did not apply on his de-secondment. The terms and conditions of contract termination cannot, therefore, be derived from the Act which is not applying to his de-secondment.

So, what is the issue here?

By suing for employment benefits under the “2022- 2028 contract”, a contract he was never offered, never agreed to and never performed any sort of obligation under it, Kabambe is claiming money he was never entitled to in the first place.

This extra mile is his claim for a further K 1, 814, 581, 389.20 under the “2022-2028 employment contract”, a contract that was never agreed with him and has not yet performed any obligation under it. With this act, he is officially on a mission to take something that does not in any way belong to him.

Now that the justice system has set its wheels in motion, it is only a matter of time before the truth is vindicated and we eventually witness a more just ending to the process.