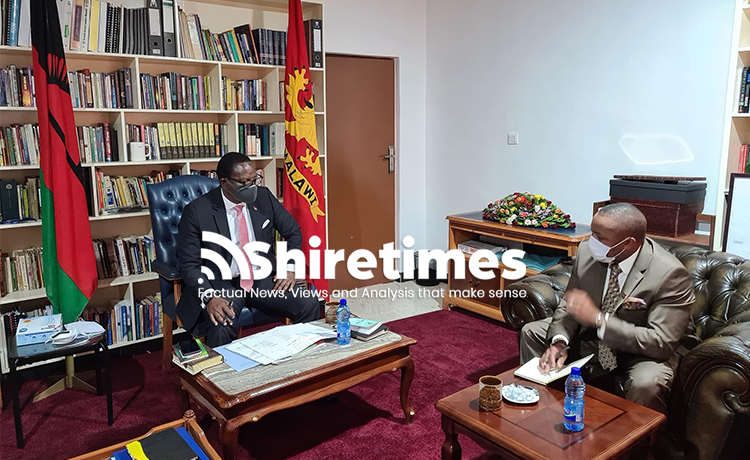 It will go down the annals of history that Lazarus Chakwera, and not Saulos Chilima, was the sixth President of the Republic of Malawi. His legacy will be written based on his administration’s performance. To put it in other words, the performance of this administration, excellent or dull, will have nothing to do with a name called Saulosi Chilima or any other than Lazarus Chakwera. “One president at a time” so we say.

To some, this may be an uncomfortable reminder – yes, it is.  Therefore, what is the point of making such an uncomfortable reminder? The point is; if Chakwera’s Presidency is to suddenly end today, one year into his first five-year term, save for food security courtesy of the Affordable Input Programme, history will contain a blank space which was yet to be filled with expected landmark achievements. That would be a harsh judgment if you ask me, yet one standing with a claim of fidelity. The reason is simple: The promised rubble-clearing process, which is a fundamental precursor to smooth flowing with the new administration’s agenda, is evidently taking longer and opposing desired progress.

However, some Malawians, these authors inclusive, still have hope for this President. We desire him to succeed and this is, perhaps, the reason why this piece has been put across, to share with him some tip(s) for him to use for the benefit of – us – Malawians. It is important to immediately highlight that he is the President of our country on whose shoulders lies the responsibility to take Malawi to the promised land of Canaan and not to Kabul-Afghanistan as others are mockingly insinuating that we are heading to.

In this “Tonse Government” (just out of curtsey to call it as such), certain key and consequential positions should be occupied by only those that the President, and not his Vice, can truly trust to deliver for the good of the populace. The President surely saw that the motive was not good when someone allocated to himself the Finance Minister Portfolio before the 23 June, 2019 elections. The President displayed true possession of mandate by appointing someone he could truly entrust with the job, ignoring the pre-emptive self-alignment of his then running mate.

On this drift, we must certainly point out that one other key ministry which is not in safe hands is the Ministry of Energy. It remains undeniable fact that mishaps incurred in this ministry have a direct effect on the economic well-being of our country, yet we are saying without blinking that this ministry was placed in wrong hands. Look: A mafia complot is relentlessly attempting to turn NOCMA into their ‘franchise’. Oh God Father of Jesus and Abraham!

Perhaps let us narrate this rot:

After failing to loop in NOCMA management into the fuel deals, the Minister of Energy, (not so)Honourable Mr. Newton Kambala and his cartel mates, which among others include Mr. Ishmael Chioko the acting CEO of MERA and MERA’s Board Chairperson Mr. Leonard Chikadya, resolved to (ab)use MERA as a regulator to spearhead their corrupt agenda and frustrating NOCMA’s fuel supply procurement process in so doing.

Wait a minute: As we have disclosed in our separate report, at the center of this looting machinations at the energy sector by the Malawi’s new corruption cabal are two syphoning conduit fuel supply companies namely Trafigura and Oryx. It is not a mere coincidence that Trafigura owns majority of shareholding in PUMA Energy. It is not a mere coincidence that the Minister of Energy, who owns a Filling Station branded PUMA Energy, is cahooting with Trafigura to bulldoze it into the fuel supply contract with NOCMA.

The smell of desperate intent to indulge in the loot is too strong to be overlooked. Imagine the Minister signing a Memorandum of Understanding with Trafigura on 23rd September 2020, exactly six days just after the tender was notified to the public. Well, that’s what happened exactly!

We, at Shire Times, understand that the scandal is under the investigative radar of the ACB. Fine! However, we must be quick relay a report which mentions that at a meeting held in Mangochi on 15th May 2021, NOCMA made a presentation before the Parliamentary Committee on Natural Resources, Energy and Climate. MERA officials, including Mr. Chikadya and Mr. Chioko, who were also present in the meeting were seen sweating as NOCMA exposed MERA’s cooked up figures which were previously relied upon by MERA to reject endorsing NOCMA’s supply contract award to successful biders.

After the sweating session, MERA accepted that the figures were indeed wrong. Surprisingly, the Daily Times eventually published a story based on the disputed figures. Oh yeah, I remember: Mr. Chikadya is the CEO of the Times Group under which the Daily Times exist. So, he bulldozed its way on the publication with a clear intent to not only mislead the public, but also shield his calculated, yet busted, agenda.

One would be forgiven to think that this kind of rubble was inherited by the new administration from the previous DPP regime. The fact remains that it is rubble that has defied the President’s intent to operate with a clean system. Their allegiance to their selfish interests is, apparently, superseding anything.

Oh, thee ACB! Thy swiftness in thy task is sought for thy findings shall be handy evidence to prosecute and remove this daunting rubble which is standing in the way of swift progress so anticipated by this nation!

Oh, Mr. President! Remove from our menu the lethal concoction Minister of Energy Kambara; MERA Board Chairperson Leonard Chikadya; and MERA CEO Chioko.  It is a concoction so poisonous concoction.

We understand you Mr. President that you want to be slow in offending people. The tragedy is that people whom you are shy from offending are more than determined to not only offend, but also betray you and your seemingly good cause towards this country. We beg you, in the name of Malawi, and for the sake of Malawians, to reshuffle them.