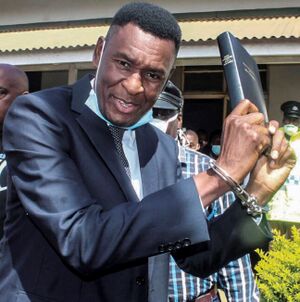 LILONGWE-Chief Resident Magistrate Patrick Chirwa of the Lilongwe registry has rejected an application by former president Peter Mutharika’s bodyguard, Norman Chisale, who wanted the court to restart the certificate case in which the former Malawi Defence Force (MDF) soldier is accused of using another person’s Junior Certificate of Education to get recruited into the force.

The defence had further asked for the resummoning of all the witnesses in the case.

Chisale appeared before the Chief Resident Magistrate on Monday, where he took a fresh plea of not guilty in all the three counts relating to the case.

Apart from the amendment of the charge sheet, the certificate case was transferred from Senior Resident Magistrate Shyreen Chirwa who was moved to Industrial Relations Court.

But Chirwa dismissed the Application saying the defense failed to give evidence on how this is going to be prejudicial or unjust to the accused.
Later speaking to journalists, Pirirani Masanjala Senior State Advocate said the court has ordered both parties to file submissions on case to answer within 14 days from yesterday.

Chisale was one of the untouchables during the reign of Democratic Progressive Party (DPP), a party which is widely accused of destroying the country through looting and plundering of government resources without remorse.

It is alleged that the Professor Mutharika’s personal bodyguard and other business people benefited from his  TPIN to import bags of cement from Zimbabwe, equipment and other materials duty-free.