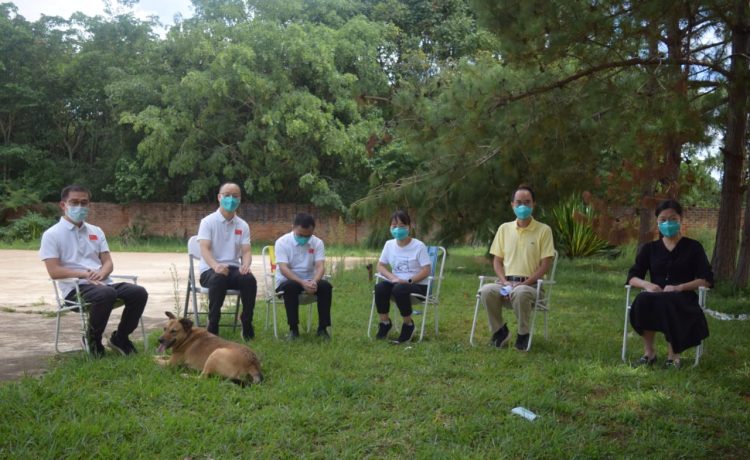 But Dr. Sinyiza’s efforts to provide health care services to a catchment area of over 2 million people are continuously hampered by lack of medical equipment, drugs and medical doctors.

“Mzuzu Central Hospital and Malawi as a whole has a shortage of specialized doctors to provide and conduct critical surgeries and this is one of the challenges as an institution we are facing in order to offer quality health service,” says Dr. Sinyiza.

To Dr. Sinyiza’s relief, since 2007, Chinese Medical Team comprising Physicians, Surgeons, Anesthesiologists, Pediatricians, Gynecologists, Obstetricians and Radiologists are dispatched from the Shaanxi Province in China and placed at the facility as well as Kamuzu Central Hospital in the capital city, Lilongwe.

The doctors are also providing on-the-job training through case discussion, demonstration and explanation of procedures, formal training sessions, and the introduction of new technologies and techniques.

According to Dr. Sinyiza, the Chinese Medical Team provide cover on the deficiencies the hospital has on specialist doctors and hopes they continue as the country works on training more doctors.

He said: “Malawi should invest in its own doctors for the long term while in the short term we are getting the Chinese Medical Team.”

Currently the ninth batch of Chinese medical team from Shaanxi province is in Malawi joining and to take over from the eighth batch which has been in the country for more than a year to deliver medical aid.

According to Dr. Li Xiaogang, team leader of the outgoing batch of 17 specialist doctors, the year 2021 marks its 58th anniversary since the establishment of Foreign-Aid Medical Team from China to overseas.

Dr. Li who is also an Anesthesiologist says the medical team is the earliest project of China-Malawi cooperation.

“Since 2008, China has sent nine batches of medical team to Malawi and over the past thirteen years, members of China Medical Team in Malawi were away from their motherland and family relatives, overcame all difficulties and fulfilled their mission.

“They put China Medical Team’s spirit into practice with selfless actions, noble medical ethics and excellent medical skills. They’ve made contributions to the development in medical and health sector of Malawi, and the friendship between the people of both countries. They are also contributing to China’s endeavours to promote the construction along the way to a community of common health for mankind,” said Dr. Li Xiaogang.

Another member of the team, Dr. Tian Juan, a physician who was placed in the Internal Medicine department at Mzuzu Central Hospital said in the past one year, the medical team has diagnosed and treated many outpatients and inpatients, carried out many complicated and highly difficulty operations, such as pregnancy with huge ovarian tumor, complex intestinal obstruction, including providing anesthesia for a newborn with a huge tumor.

She said: “We have done a lot of work in the aspect of critical illness.  For example, we helped to improve the management of heart failure and diabetic ketoacidosis, and the success rate of rescue has been increased. We have also brought up some well qualified local medical personnel through teaching and training.

Dr. Tian Juan also made a major milestone at Mzuzu Central Hospital in April 2021 when she treated the first case of scleroderma, a rare disease, to be reported at the facility.

“A 39-year-old female, presented with painful and numbness in lower limbs, with subsequent local stiffening and darkening of the skin. After four months, the symptoms progressed to the upper limbs, neck, chest and back, and were accompanied by dysphagia. In the beginning, the patient went to a hospital in South Africa, but the symptom did not improve.

“When the patient came to Mzuzu Central Hospital, she was very weak, unable to walk, and hard difficult to swallow. According to the typical symptom, I diagnosed her with scleroderma, which is a very rare disease. I treated her with prednisone and immunosuppressive, as well as some medication for relieving digestive tract symptoms and nutritional nerves. After several months of treatment, the patient’s symptoms gradually improved,” she proudly says.

She added that in wake of the COVID-19 pandemic, the medical team also actively shared China’s anti-pandemic experience, such as wearing face masks and washing hands before entering hospital, keeping distance and keeping windows open, and Chinese traditional medicine treatment.

These measures she adds, played a role in preventing infections in the hospital, ensuring the health safety of medical staffs, and maintaining smooth operation of hospital with a positive effect.

Meanwhile Dr. Liang Gang who was a surgeon in the Surgery Department said the medical team was also able to perform all these critical procedures despite having to do without vital medical instruments and medicine.

He says he was also impressed with the good relationship between doctors and patients in Malawi.

“It is better than what we estimated in some aspects, but there are still some gaps. Public hospitals in Malawi provide free medical care for all people, and the relationships between local doctors and patients is good. The medical staffs are very friendly and dedicated, and cooperating well with Chinese doctors.

“However, the medical conditions are not as good as what we estimated; hospitals here are short of medical instruments and medicines. For that reason, we feel regret that some patients could not get treatment in time due to a serious shortage of medical staffs; some treatments could not work well because of medicines shortage; some operations can’t be performed because of insufficient surgical supplies,” said Dr. Liang Gang.

For their presence at the Mzuzu Central Hospital, Dr. Sinyiza says he bemoans the frequent rise in Covid-19 cases in Malawi in the past year which has been distracting and disrupting the eighth batch of the Chinese Medical Team to be fully utilized.

With the emergence of Omicron, the medical system of Malawi is facing serious challenges again.

According to the Chinese Medical Team, the first batch of 300,000 doses of vaccines provided by China has been agreed by China-Malawi.

However, still waiting for the completion of internal procedures within Malawi government, the vaccines have not arrived yet.

“We hope that Chinese vaccines could come as early as possible, so as to support the anti-pandemic efforts in Malawi.”

Apart from their work at Mzuzu and Kamuzu Central Hospitals, the Chinese Medical Team through the Chinese Embassy in Malawi and its Ambassador, Liu Hongyang, launched three massive free clinics in rural areas and delivered medical service to people who were affected by disaster when Cyclone Idai hit some of the country’s southern districts.

The Chinese government has also been actively providing assistance to Malawi’s medical and health sector, and just recently in December 2021 Mzuzu Central Hospital was a recipient of a state of the art Computerized Tomography (CT) scanning machine through Chinese medical aid.

Recently Chinese Ambassador to Malawi Liu Hongyang said his country is committed to supporting Malawi’s heath sector as part of its continued cooperation between the two countries.

Recent data shows the eight batches of Chinese Medical Teams have so far made 88,100 outpatient visits, 114,800 inpatient visits, and have completed 27,200 surgeries combined at Mzuzu and Kamuzu Central Hospitals.