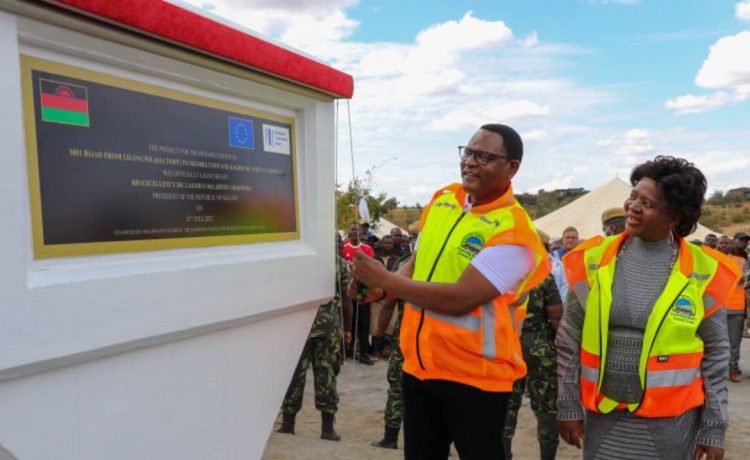 After many years of cries and demands to have the overused M1 road rehabilitated, the Tonse Government led by President Lazarus Chakwera has launched the 301km European Union (EU) funded project at Mtiti in Dowa.

The 140 billion kwacha project covers from Kamuzu International Airport turnoff in Lilongwe to Chiweta in Rumphi with four sections of the road constructed by different contractors.

Speaking after he officially launched the project on Tuesday, President Chakwera described the M1 road as a backbone of the country’s road infrastructure and this project has indeed been long overdue.

The President continued by wondering why previous governments did not prioritize the M1 road despite development partners willing to fund the project.

On his part European Union Investment Bank (EIB) for Southern Africa, Jim Hodges said this is the single largest investment the EIB has given Malawi or anywhere else because they understand the value of the M1 road and how it affects Malawians.

He also added that the rehabilitation of the road is important for efforts to improve rural roads to allow smallholder farmers access to wider markets.

“Thanks to the Malawian Government and people for patience for the loan to be approved so that the project should kickstart. The road will change a lot of lives when completed and this will change Malawi from a landlocked country to a land linked country,” said Hodges.

The M1 rehabilitation project consists of a multi-scheme road operation for the rehabilitation of 301 km of the single carriageway road with no changes to the existing alignment.

Meanwhile, the road is also an important link in the North-South Corridor network of COMESA as it facilitates regional trade with Tanzania in the North and Mozambique in the South and further beyond to other countries of the SADC region.