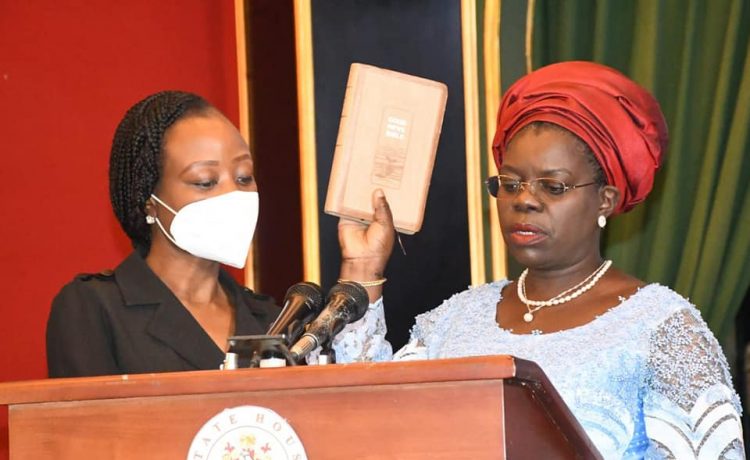 Malawi President Dr. Lazarus Chakwera presided over the swearing-in ceremony of Ms. Colleen Zamba, who was appointed as Secretary to the President and Cabinet on 31st May 2022, replacing Zangazanga Chikhosi who has been assigned other duties.

Speaking at the colourful ceremony, Chakwera asked Zamba to serve Malawians with passion so as to move the nation forward.

“In Ms. Zamba I see a person of great fortitude who is ready for the task of implementing Government policies and presidential programmes across the public sector, as well as the efficient and professional delivery of public services to Malawians by the Civil Service.

“For over a couple of decades our Civil Service has lost a great deal of work ethic, an anomaly my administration is remedying through enculturation and restoration of key values that must characterise every workplace,” said Chakwera.

He added: “Ms. Zamba will therefore be instrumental in this process of reorganising the engine of government service delivery to make it effective and responsive to public needs.

We owe her our full support as a nation during her tenure.”

Gender activists in the country commended President Chakwera for appointing Zamba as new, saying this was a fulfilment of the Gender Equality Act.

“Government is trying to achieve equal representation. I can cite the increase of women representation in the Cabinet as well as other key positions such as the director of Anti-Corruption Bureau and the Ombudsman.

“We feel Gender Equality Act has been honoured and we are happy with the appointment of Colleen Zamba as Secretary to the President and Cabinet. This is a fulfilment of the State’s obligation to the Act requirements,” gender activist Emma Kaliya said in an interview with Nation Newspaper.

Oxfam in Malawi country director Lingalireni Mihowa said Zamba’s appointment shows that the President has confidence in the capabilities of women and their leadership.

“We have seen her profile. She has been in civil service before and that gives her the experience to lead. We commend the President for taking a bold step in improving the visibility of women leadership in Malawi in line with the Gender Equality Act which says that there has to be 60/40 representation in key decision-making positions.”