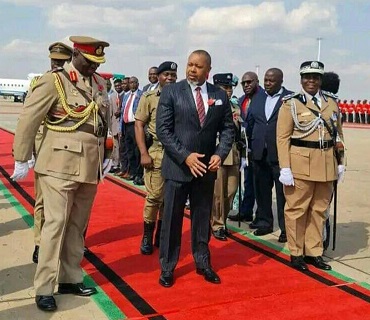 When Vice President Saulos Chilima dismissed a guard of honour when president Chakwera was flying to the United States of America for the USA-Africa summit, word on the street was that Chilima was delegated presidential powers, something the President himself had pronounced himself that due to the veep being implicated in the Sattar corruption scandal, he resolved to withhold delegating the vice president any responsibilities.

However, the government’s principal legal advisor Thabo Chakaka Nyirenda has come in the open to tell the nation that the act of dismissing the guard of honour was not symbolic of the fact that the President had delegated powers to Chilima. According to Nyirenda, presidential powers are delegated in writing.

Said Chakaka Nyirenda: “Remember the President said that he has stopped delegating and that hasn’t been revoked. The problem is that people look at the physical presence, he [the President] is not physically present, but he is still in charge.”

Section 89(6) of the Constitution stipulates that “the powers and functions of the President shall be exercised by him or her personally or by a member of the Cabinet or by a government official to whom the president has delegated such powers in writing”.

UTM sympathizers of the Vice President Chilima were bragging on the social media stating the country was now in the control of the veep contrary to AG’s submission that Chakwera was still in control of the country despite being away.