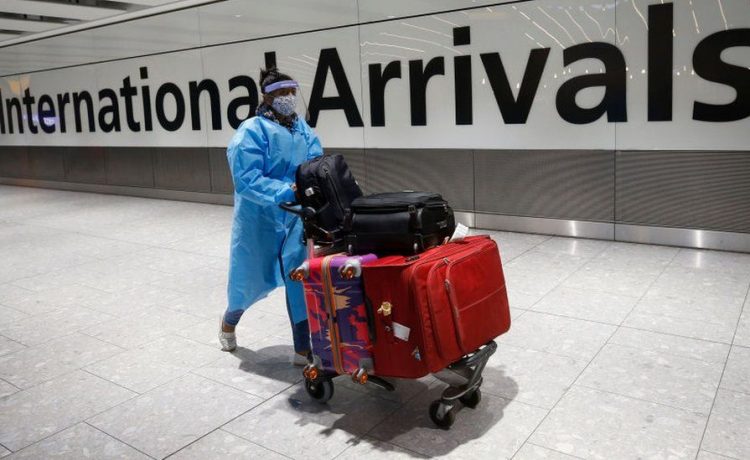 President Lazarus Chakwera, who is also the chairperson of the Southern African Development Community (SADC), must be a happy person as he returns home from Botswana as United Kingdom has removed 11 African countries from UK’s travel red list.....
0Share

President Lazarus Chakwera, who is also the chairperson of the Southern African Development Community (SADC), must be a happy person as he returns home from Botswana as United Kingdom has removed 11 African countries from UK’s travel red list.

Malawi, Zambia, Botswana, South Africa were some of the countries on the list.

Speaking on Tuesday in Botswana, Chakwera said there was a need for respect of all humanity and collaboration among all sectors in the fight against the Covid 19 pandemic.

The SADC Chair’s comment followed a travel ban imposed by several western countries on the Southern African countries due to the Covid 19 Omicron variant.

In response, UK has removed 11 African countries from the travel red list effective from 4am, Wednesday.

The red list was reintroduced in late November as a precaution after the emergence of the Omicron variant.

But Health Secretary Sajid Javid said it had spread so widely such that the rules no longer had much purpose.

“Now that there is community transmission of Omicron in the UK and Omicron has spread so widely across the world, the travel red list is now less effective in slowing the incursion of Omicron from abroad,” he told Parliament.

“Whilst we will maintain our temporary testing measures for international travel we will be removing all 11 countries from the travel red list effective from 4am tomorrow morning,” he added.

All UK arrivals from red list countries are required to pay for and self-isolate in a pre-booked, government-approved hotel for 10 days.

But with all 11 countries being removed from that list, it was confirmed that those currently in managed quarantine would be allowed to leave early and “follow the rules as if they had arrived from a non-red list country”.

Some travellers had paid thousands of pounds to stay in government-approved quarantine hotels, with complaints of chaotic organisation and inedible food during their stays.

Anyone who has tested positive will to remain in isolation, the Chancellor of the Duchy of Lancaster Stephen Barclay told the House of Commons.

Mr Javid also said earlier he was “very persuaded” by calls to reimburse people and hoped to make an announcement on that soon.

The point of putting countries on the red list was to act quickly to slow the spread of Omicron.

Now it has spread in the community, the government doesn’t think putting people from a limited list of countries in hotels is useful.

It will be welcome news to people with plans to come to the UK from countries like South Africa and Nigeria, or who had delayed their return from those countries.