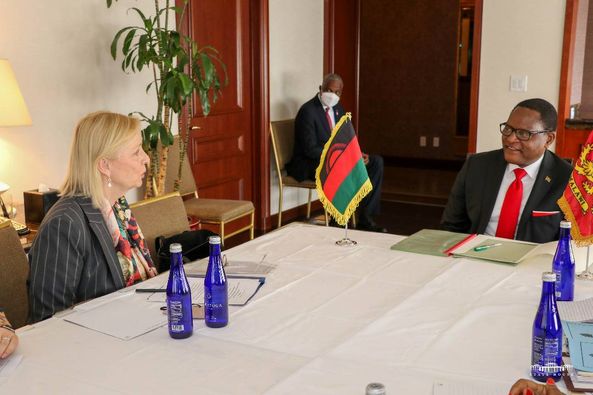 The United Nations has praised Malawi’s government, led by President Lazarus Chakwera, for demonstrating a commitment to graduating from the Least Developed Countries (LDCs) through strong policies targeted at improving people’s social and economic standing.

She said her office was impressed with the commitment that Malawi’s leadership had displayed during the negotiations of a new programme of action being designed by the United Nations which will bring true change to people’s lives and livelihoods in the Least Developed Countries.

“Malawi as the head of the LDCs represented the group with rationalism such that now the UN and member countries have a great opportunity to adopt the new programme of action for the next 10 years and the programme aims to ensure that all 46 member countries graduate and bring meaningful change to the livelihoods of the citizenry.

“Every country wants to move forward and this is what we are fighting for and as leaders we are working to bring all different partners to the table, to implement the new program of action that includes private sector all international financial organizations developing partners and all UN funds programmes agencies as well as women and youths,” she said.

She also added that the UN is collaborating with the private sector, all international organizations, all UN funds programme agencies, the youth and women to achieve this plan of action and would succeed if all 193 member states of the UN join hands so that the UN family will no longer have this category of the LDCs.

On his part President Chakwera said the meeting with the UN Acting High Representative for the Least Developed Countries, Landlocked Developing Countries and Small Island Developing States was fruitful with Malawi giving the UN its proposed policies ahead of the adoption of the Doha Programme of Action.

“We discussed and received approvals on the commitment Malawi has made to align our development agenda with the Doha Programme of Action that will be adopted at the fifth LDC summit on Thursday,” said the President.

“All the three leaders reiterated UN’s sustained support to Malawi to help us adopt and benefit from various innovative development solutions.

“We also deliberated on the priority areas for Malawi from the 76th General Assembly held last year, we have agreed to reinforce our partnership in order to achieve practical and innovative ways that will help us transform the economy of Malawi,” said Chakwera.

President Lazarus Chakwera is attending the first part of the fifth United Nations Conference on the Least Developed Countries (UN-LDC5) at the UN headquarters.

The summit is expected to adopt the Doha Programme of Action which seeks to rally support from the international community to LDCs in eradicating poverty, fostering science, technology and innovation as well as addressing climate change and recovering from COVID-19.