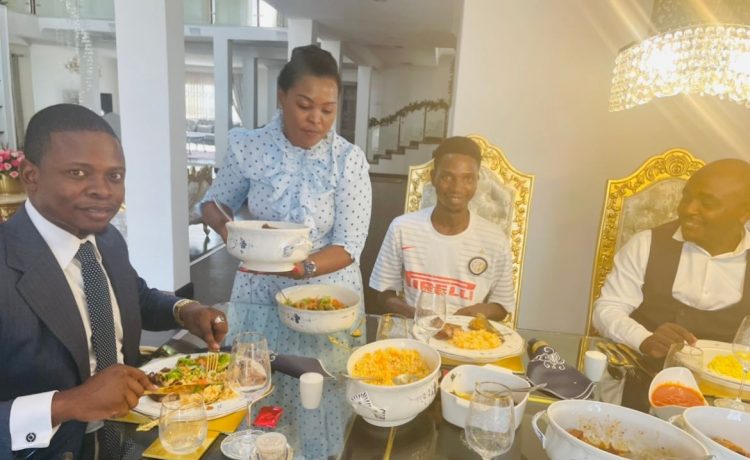 Prophet Shepherd Bushiri of the Enlightened Christian Gathering (ECG) and president of Shepherd Bushiri Investments (SBI) has bailed out a Lilongwe needy young man in Lilongwe immediately after he posted on Facebook that he had a burning desire to meet with him.

The young man, James Chunga, based in Kawale in the capital said he had always been touched by Bushiri’s way of life – especially his philanthropic ministry – and wanted to meet and learn from him.

“When I posted my wish, it was not really that I thought I would meet Bushiri; but at least it eased my burning desire to meet the Prophet.

“But the thing is I follow him [Prophet Bushiri] earnestly. His story is an inspiration to millions that anything is possible if you believe and have faith,” Chunga said in an interview.

Prophet Bushiri, a staunch social media user himself, saw the post and instructed his public relations officer, Ephraim Nyondo, to look for Chunga and bring him to his house for lunch.

“I brought James to his house last Sunday where he was treated to a salacious lunch cooked and served by Prophet Bushiri’s humble wife, Prophetess Mary

“In the discussion, the boy—still in deepest disbelief; narrated his troubled background and, in his plea, he asked the Prophet to help him with education. He only has a Junior Certificate and he wants to redo his MSCE and, God willing, excel to college.

“The boy went home happy as the Prophet, who has about 200 students on his bursary, added the boy to the list,” Nyondo said.

Chunga is one of the hundreds of young men and women that need financial help and are at the verge of dropping out in their academic endeavors, said Jackson Msiska, a social commentator.

“We are getting a lot of calls for help on social media of many capable young men and women who are dropping out or are at the verge of dropping out of school because of school fees. If he has the stamina, let him help them just as he has done with Chunga,” Msiska said.

Last month Mzuzu University (Mzuni) announced that at least one hundred and twenty-five students were on the verge of withdrawing while sixty-eight had been removed from the institution this school academic alone due to financial woes like school fees.

University’s communications manager, Cliff Kawanga, said that Mzuni needed K50 million if the 125 students were to stay on campus.

He said the Vice Chancellor, Professor Kalenga Saka, some members of staff of the institution had “walked for these needy students.”

It is not yet known how much was raised from the initiative.

On average, Mzuzu University enrolls 1,000 students per academic year. Of these, a maximum of 200 students find problems in paying school fees.

In 2015, Parliament put in place Higher Education Students Loans Board to finance access to higher education for needy and deserving students in Malawi.

But still hundreds of students in institutions of higher learning—both public and private—find it hard to finance their academic pursuits.