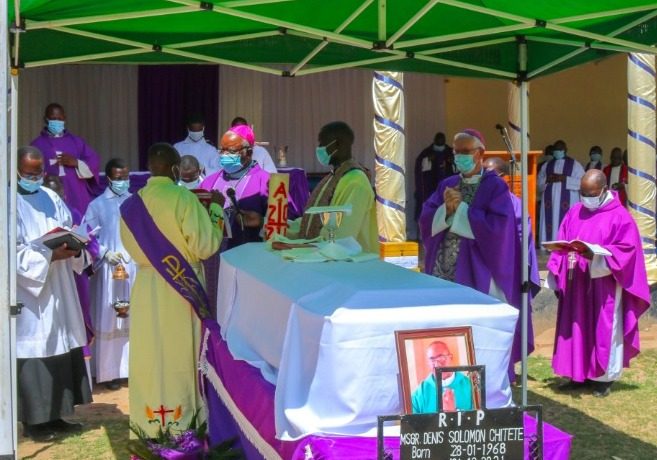 At exactly 01:58pm on a bright Monday afternoon, Monsignor Denis Solomon Chitete’s remains were being interred into his final resting place at Chaminade Cemetery in Karonga District after dedicating 25 of his 53 years life on planet earth ministering the word of God.

It is his dedication, commitment, kindness, humility, hard-working spirit, relationship with God, and friendliness with people in society that prompted tens of thousands of people from all walks of life to brave the scorching sun of Karonga to go to St Joseph the Worker Cathedral for Monsignor Chitete’s requiem mass to pay their last respects and celebrate the life of a man of God.

Somber mood characterised by moving biography, touching eulogies and homily summed Chitete’s stay on earth who until his death was the Vicar General of the Diocese and Karonga District Peace Committee (DPC) vice chairperson.

In his homily drawn from a letter from Paul to the Church of Rome, Romans 8 verses 31-39 and the book of John 11 verses 17-27, Father Benard Silungwe emphasised that as Christians, we are fellow-hers with Christ if we suffer with Him and we must suffer in order that we may also reign with him.

To drive the pastoral praises home, Father Edward Kamanga read a brief but rich biography of the late Chitete which described him as a kind, generous, humble and committed Priest with deep faith and special devotion to the Eucharist and Divine Mercy.

Said Kamanga: “The fallen Vicar General was a natural teacher, jovial with high sense of humour, accommodative and able to interact with anyone. He had a listening spirit and avoided and prevented conflicts and strived to advocate for peace amongst priests”.

Taking their turns in paying their last respects in eulogies, an uncle to the deceased Edward Chitete who represented family members described the death of Monsignor Chitete as a blow to the clan.

“We are devastated with his untimely death. He was the source of wisdom who was always readily available to everyone without looking at one’s age and status,” he said.

On his part, Karonga Diocese Laity Council Chairperson John Mtambo said in Monsignor Chitete, the Diocese had lost a great and fine teacher who was open, objective and offered constructive criticism and never kept grudges with anyone.

He said: “Despite attending the same priesthood training, every Priest has his own gifts. And that has been manifested by Monsignor Chitete. He was humble, kind, friendly, orderly and serious with his pieces of advice. We learnt a lot from his style of administration. He was always smart and always told us that cleanliness is next to Godliness”.

Father Steve Bulambo who spoke on behalf of Priests and Religious working in the Diocese of Karonga briefly described the late Chitete as a rare breed who had a special calling to make sure that the Diocese grows in both spirit and social development.

Capping it all, the Diocesan Bishop Martine Mtumbuka did not beat about the bush but openly said that he did not gather courage to put together words with which to eulogize Chitete with whom he established the Diocese in 2010.

“In Monsignor Denis Chitete, I have lost a great advisor who was always calm, and measured, full of balanced views when discussing matters of national interest. He has endured a lot both within and outside the Diocese but he was strong.

“We strived together to establish, build, work and serve tirelessly for the people of Karonga Diocese. But like Monsignor Chitete and I have always said, we are strangers in this world and after all is said and done, it is God who will reward Monsignor Chitete for standing strong in Jesus Christ,” he said.

From the biography to eulogies, one could tell that the late Monsignor Chitete always liked to make peace with people and wanted people to live peacefully.

Probably, this could be the reason why he was elected Karonga District Peace Committee vice chairperson to help the district in conflict resolution and bringing about peace amongst people through various interventions and engagements.

Karonga DPC secretary Aaron Mwenilupembe was at loss to describe the loss after the committee also had lost its chairperson two weeks ago.

“As a committee, we are shocked and devastated. We have lost dynamic leadership and Monsignor Chitete contributed in the drafting of the National Peace Commission Bill and was a key figure and brain behind the successful mediations the committee has registered”, he said.

His outstanding performance caught the eye of the country’s leader President Dr. Lazarus Chakwera who appointed him as Northern Region Water Board (NRWB) board member.

And upon hearing about his demise, the President did not hastate to pay his tribute by delegating Minister of Lands Kezzie Msukwa to represent him at the burial ceremony who described Chitete as a faithful and humble advisor to the President and the entire government.

He was ordained on July 14, 1996 at St. Steven’s Parish at Kasantha in Karonga district and from that year, Monsignor Chitete served in various parishes and Seminaries as a Lecturer and Rector at Kachebere Major Seminary before going back to Karonga where he served as Vicar General of the Diocese from 2010 and cerebrated Silver Jubilee on September 4, 2021.

He walked his last mile when he was laid to rest on Monday at Chaminade Cemetery in Karonga district after a successful and admirable pastoral duty of tour of 25 years.