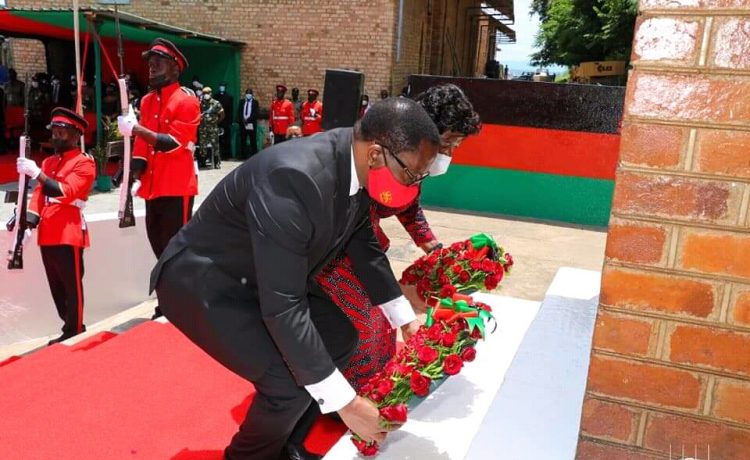 President Lazarus Chakwera  led the country in commemorations of Martyrs Day in Nkhata Bay on Thursday where he pledged his government will make sure all martyrs are accorded the recognition and respect they deserve for fighting for the country’s freedom.

Speaking on behalf of the bereaved families at the ceremony, James Thawe thanked government for taking over the event as it was hard for the district’s executive committee to continue organising it because of financial difficulties.

He said by taking it over, government has given the recognition the day deserves in memory of their family members who died fighting for the country’s sovereignty and freedom.

He then went on by asking President Chakwera and his administration to look after the welfare of the bereaved family as many are suffering with poverty at the moment.

“The bereaved families are suffering with high poverty levels despite their parents and relatives losing their lives in fighting for the country’s independence, please we need assistance from government,” lamented Thawe.

In his response during a speech at the event, the Malawi leader assured the bereaved family not to worry as the adoption of the day by government shows the recognition his administration is having on the importance and significance of the 3rd March Martyrs Day.

“Malawians should unite as our national anthem verses preach that Malawi today is a product of martyrs that fought colonialist for our independence.

“We should not forget our martyrs as we enjoy our freedoms now as many people lost their lives for this.

“My administration will be correcting the errors that exist whereby as a country we have been honoring martyrs selectively,” said President Chakwera.

Earlier before arriving at the Memorial Pillar, President Chakwera visited Manolo, Traditional Authority Timbiri to pay respect to renowned freedom fighter late Orton Chirwa where he also laid a wreath at a site government is constructing a new mausoleum in his memory.

Speaking to the family of the late Chirwa, the President said apart from construction of a new and better mausoleum, government will improve the village and rehabilitate the school where freedom the fighter attended.

In his remarks the President described late Orton Chirwa as man of great vision and a true patriot.

He said; “Orton Chirwa was a man beyond his time, a man of great vision, a man of formidable courage, a man of principle, a man of peace, a patriot at heart and a true Malawian.

“This son of Nkhatabay served his country and gave Malawi his best and full measure of devotion.”

The President also disclosed that government will construct a new Orton Chirwa International Airport in honor of his name.

The 3rd March Martyrs Day was set aside in order to commemorate Malawians who lost their lives on this during a State of Emergency of 1959 as the country was fighting for independence against the British colonial rule.

The day will now be organised by the Office of the President and Cabinet under the Ministry of Tourism and Culture’s Museums and Monuments department.