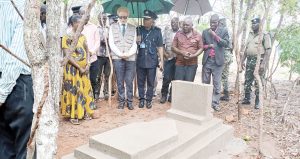 In Malawi, persons with albinism feel insecure to go to bed for fear of being attacked or murdered.

The most recent attack and murder is that of a three-year-old girl, Talandira Chirwa, who was stabbed on the neck and her arm chopped off before the assailants went away with it.

Talandira was sleeping on the same bed with her grandmother in their home in Kasungu District when an unidentified people broke into the house and stabbed her and went away with the girl’s arm.

As people are busy working hard to earn a living and live a better life, some people still think that they can get rich by simply taking away life of a person with albinism.

This is what has been driving attacks of people with albinism in Malawi.

People with albinism in the country face numerous human rights abuses such as abductions, killings and mutilations on the assumption that their nature boosts magical powers.

Nkhata Bay-based primary school teacher, Nyakondowe, fears for her life too and that of her two other siblings who have Talandira’s skin condition.

The 27-year-old says her house is not well secured and she fears evil-minded people can attack them one day.

“After the attacks on persons with albinism started in the country, communities started patrolling our area to curb the inhumane and barbaric behaviour,” Nyakondowe says.

Malawi government has taken various measures to end such attacks.

In 2019, it distributed mobile personal security alarms to the country’s estimated 10,000 persons with albinism.

It also offered cash rewards of up to $7,000 to anyone who would have information about abductions and killing of such people.

It further developed the National Action Plan on Persons with Albinism in Malawi (2018- 2022) which contains various strategies in tackling abuses against persons with albinism.

Some international human rights bodies have spoken against attacks on persons with albinism in Malawi.

The United Nations previously warned that people with albinism are at risk in Malawi where they are attacked and murdered in cold blood.

Amnesty International called  on the authorities in Malawi to improve the protection of persons with albinism across the country following the killing of three-year-old Talandira Chirwa and other attacks in recent years.

According to a National Police report, in 2021, four cases were recorded and there was no one who was killed. All cases were to do with grave tampering and someone being found with human bones.

In 2022, one person was killed. It was Talandira. The other six were to do with people tampering with graves and some who were found with human tissue especially bones.

Malawi is adding a continent framework in its toolkit.

The African Charter on Human and People’s Rights- Disability Rights Protocol, popularly known as The African Disability Protocol (ADP), is one legal framework where African Union member states are expected to formulate disability laws and policies to promote disability rights in their countries.

The protocol addresses specific issues such as customs, traditional beliefs, harmful practices and the role of the family, caregivers and community members.

It also deals with community-based rehabilitation and minority groups within the African disability community, including people with albinism.

It is the only International Human Rights instrument that expressly recognises the plight of persons with albinism most especially the attacks they face.

The protocol was adopted in 2018 as the Disability Protocol to the African Charter on Human and People’s Rights (Banjul Charter). It will come into effect only after it is signed and ratified by 15 member states of the African Union.

Federation of Disability Organisations in Malawi (Fedoma) Project Manager, Ethel Kachala Chibwana, stresses on the need to have the protocol ratified.

She says the protocol is one of the ways by which issues of human rights are owned and advanced by Africans themselves.

“This is a great opportunity for us as Africans with disabilities to enjoy disability rights to the fullest as the protocol has been developed based on unique disability needs and experiences to our continent,” Chibwana says.

She further says it is high time that as a nation, Malawi sets the pace for other countries to follow.

“By signing and ratifying the protocol, Malawi will demonstrate to the world our serious resolve to deal with violations of rights of persons with disabilities in general and those with albinism in particular,” she says.

Malawi is one of the countries on the continent that have signed the protocol but are yet to ratify it.

John Kabaghe, spokesperson in the Ministry of Foreign Affairs, says Malawi is not necessarily failing to ratify the ADP; instead, it is subjecting the instrument to internal procedures in the run up to ratification.

Kabaghe says the process requires thorough consultations to ensure that all stakeholders are able to comply with the obligations, legal and financial.

“The ministry is working towards ADP ratification within the first quarter of 2023,” he says.

Kabaghe further says Malawi has a robust legislative framework to combat the killings of persons with albinism.

“You will recall that the Penal Code was amended to specifically address these issues. The judicial system is able to successfully prosecute cases pursuant to such laws,” he says.

Malawi is also a party to the Convention on the Rights of Persons with Disabilities (CRPD) which upholds international standards on the protection of persons with disabilities, including persons with albinism.

Kabaghe, however, says joining the ADP should definitely enhance Malawi’s collaboration and cooperation in Africa on the protection, promotion and fulfilment of the rights of persons with disability in the region.

One of the organisations that has been promoting the ratification of the protocol is Sight Savers International (SSI).

SSI is doing this through the ‘Equal World Campaign’. It is working with partners in Ghana, Malawi, Nigeria, Senegal and Sierra Leone to campaign for the ratification of the protocol.

Bright Chiwaula, Sight Savers Malawi Country Director, says there has been sensitisation for organisations of persons with disabilities (OPDs) about the ADP such that they have secured an interest among OPDs to advocate for the same from an informed position.

“By not ratifying the ADP, it means that some specific disability challenges and issues in the African context are still not being addressed fully thereby subjecting some people with other types of disabilities to continuous harmful behaviours by the society,” he says