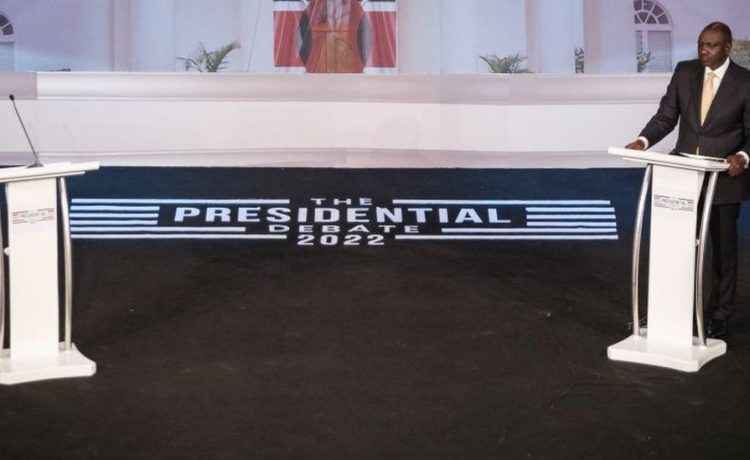 The much-anticipated debate was a solo show as only Deputy President Ruto, a leading contestant, participated.

In advance of Kenya’s presidential elections on August 9, its much-anticipated debate of the top contenders took place on Tuesday.

But it was essentially a solo show after one of the two candidates, veteran opposition figure Raila Odinga, snubbed it.

Odinga, said in a statement that he could not share a podium with the leading opponent, Deputy President William Ruto, who “has no regard for ethics, public morals or shame, and lacks decency”.

In a rebuttal on stage, Ruto said Odinga lacked an agenda to share with Kenyans and that he had been advised by President Uhuru Kenyatta not to attend.

Ruto and Kenyatta were elected together in 2013 and 2017, but have since fallen out, with the incumbent president now supporting his erstwhile long-term opponent Odinga. The president is constitutionally barred from seeking another term.

Earlier, George Wajackoyah of the Roots Party also showed up at the venue but then left claiming that he would only debate if all presidential candidates were on a single podium.

The debates had been planned to be separated into two tiers, based on an opinion poll. Two candidates: Wajackoya and David Mwaure, who scored 5 percent and below in running pre-electoral polls, were to share one podium, while Ruto was to face off with Odinga on another. Eventually Ruto and Mwaure debated separately, alone on each podium.

It was not the first time a presidential debate was charged with drama; in 2017, when Kenyatta was seeking reelection, he turned down an invitation to debate, saying he had no reason to attend as his track record spoke for itself.

On Tuesday night, Ruto was tasked with explaining the failures of the current administration but distanced himself from any errors in governance during his second tenure as the deputy president. He asserted that during the last five-year term, the president declined to assign him any roles and sidelined him from government functions.

Here are five takeaways from the Ruto solo debate.

In explaining the cost of living, Ruto blamed the government for failing to implement projects in the agricultural sector that would ensure food security.

Responding to a question about a major irrigation scheme that the government had promised but failed to implement, Ruto said the project was sabotaged by the handshake between President Uhuru Kenyatta and Raila Odinga, referring to the controversial peace deal in 2018 between the duo.

When pressed about a report by the auditor general detailing controversies that engulfed the project at the contracting stage, long before 2018, the deputy president admitted that it had issues from the start, hence the cancellation.

He also agreed that the three current government subsidies in place to manage the high cost of living were “all right”, but asserted that prices should not have been allowed to skyrocket in the first place. Maize flour, petrol and fertilisers are currently being subsidised after exponential inflation.

Maize flour, which is Kenya’s staple food product, has doubled in the last few months, from $0.84 to $1.94. The high cost of fuel was said to have driven inflation.

Ruto blamed the government for having at least 15 taxes on petrol and driving up the cost of living. Reminded that he had pushed for the increase in 8 percent value-added tax during his first term, Ruto said he has since changed his mind and will scrap some of the fuel taxes.

Ruto admitted that the 8.4-trillion-shilling ($70.7bn) debt under which Kenya is currently grappling was challenging, but said it was manageable.

The deputy president said Kenya is living beyond its means and blamed President Kenyatta and his allies for borrowing aimlessly. To manage it, Ruto said he will stop the borrowing spree, remove unbudgeted projects and increase revenue collection.

“When you look at our fiscal project, we have too many that are not budgeted for – including the recently launched Uhuru Gardens museum,” said Ruto.

During the first term, the government which Ruto serves under, had borrowed 4.5 trillion shillings ($37.8bn), a sum that has now doubled.

Independence of the Judiciary

The deputy president had a tough time explaining his belief in the independence of the judiciary, particularly after he was reminded of his description of Supreme Court judges as “crooks” after the nullification of the presidential election in 2017.

“I do not understand the context in which I called the judges ‘crooks’, but what is important, is that we complied with their decision,” he said, referring to the presidential rerun in 2017. “I am an ardent believer in the independence of the judiciary. Much as we criticised the judgement, we still believed their dictates and I convinced my boss that we go back to the ballot,” he said.

President Kenyatta had previously said that two billion shillings ($16.8m) were lost every day to corruption in Kenya.

During the debate, Ruto said he would deal decisively with corruption in the country. Asked why the government in which he serves was advancing corruption and had utterly declined to make project contracts public in accordance with the law, he said his hands were tied. Ruto said the buck stopped with the president and that his constitutional functions only allowed him to advise the president when necessary.

He declined to state whether or not he advised the president, saying he does not want to address the issue in public.

Ruto was also put to task over the Arror and Kimwarer dams, where Kenya’s auditor general said 21 billion shillings (176.7m) were lost and the projects never completed. The projects were signed during Kenyatta and Ruto’s first five years in power.

In his defence, Ruto said the dams were meant to fail to punish him and his supporters. The deputy president also insisted that only seven billion shillings ($58.9m) had been paid out and not the 21 billion shillings paid to an Italian company as has been claimed.

The director of public prosecutions took a case to court, suing Kenya’s former Cabinet Secretary for the National Treasury Henry Rotich and others allied to the deputy president. The case, Ruto said, was a political attack by the state, once again, to frustrate him.

Ruto said the security lapse that saw more than 100 people killed in North Eastern Kenya came after Kenyatta and Odinga became allied and all police reservists were withdrawn by the government due to fears they would be Ruto’s militia.

“When we came to the handshake arrangement, a false narrative was rolled out that all the police reservists in Pokot and Baringo were a militia Ruto would use and all the reservists were withdrawn,” he said.

The deputy president said the withdrawal was done to punish him politically. Asked why he never spoke about the killings publicly until recently, Ruto said that he has “spent and deployed my personal resources to take those people to hospital and bury others just because I was to be punished.”

Ruto also sought to debunk the public perception, often advanced by his opponents, that he was involved in land grabbing. The widespread belief stemmed from a High Court conviction in which he was found guilty of unlawfully taking land belonging to one Adrian Muteshi during the 2007 post-election violence. Muteshi was displaced from the town of Eldoret in western Kenya, and his 100-acre farm was taken.

He added that the people who conned him are currently in court over the land and the case is continuing. But Muteshi, 86, died in Nairobi in October 2020.