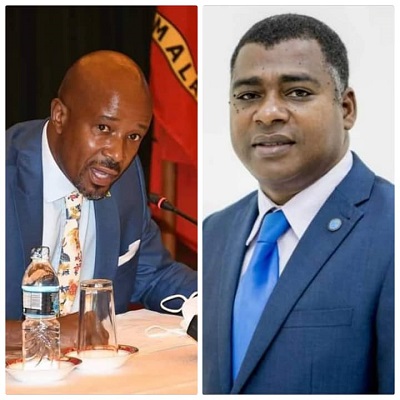 Gerald Kazembe has a strong conviction that Ralph Jooma, his rival during the shambolically managed 2019 election, used Tippex to illegally enter Parliament with 9,341 Tippex-aided votes against his 9,052 votes. For this alleged electoral fraud, Kazembe claims will not politically forgive Jooma unless the said fraud is rectified at the Supreme Court of Malawi, where the case is awaiting court procedures to be litigated, this time to finality. He charges at any given media interview opportunity that the Tippex electoral fraud denied the people of his Mangochi Monkey-Bay Constituency a chance at development. This is the genesis of this never-ending political rivalry in Monkey-Bay—Malawi’s resort district of Mangochi

Ralph Jooma recently reignited the media blitz when he dared to politically eliminate Kazembe by filing for bankruptcy in the commercial division claiming that Kazembe had failed to pay him 20 million kwacha in an agreed-upon “party-party” costs.

However, after Kazembe responded to the bankruptcy application, honestly setting the record straight that he does not intend to default from paying the said fees save for the fact that there are a lot of complex legal processes going on pertaining to the issue clearly emphasizing that he is being guided by his lawyers on what is expected of him at every given stage of the case; Jooma has backtracked and told The Nation Online on Sunday that he has withdrawn the court application. Headlined “Jooma ‘forgives’ Kazembe on K20m legal costs,” the paper quotes Jooma saying that “I have instructed my lawyer not to proceed with this petition purely on humanitarian grounds.”

Kazembe, who believes Jooma should cease dramatizing the misery of the residents of Mangochi Monkey-Bay Constituency, has not taken well to this. Similar to US President Ronald Reagan’s 1987 Berlin Wall Speech to Russian President Mr. Gorbachev, Kazembe urged his political opponent to come out from his hide-out in Lilongwe and serve the people he desperately stole their vote from.

“I told you he miscalculated the whole thing. He is hearing what we are doing for our people here in our small ways while he remains in his cacoon in Lilongwe and he is scared. Mr. Jooma, come to the constituency. Mr. Jooma, the people need development here not your witch-hunt on me,” said Kazembe.

Kazembe, a man of reasonable substantial means, has embarked on a borehole drilling project in the constituency, so far he has drilled forty-seven (47) verifiable boreholes. He also provides transport logistics when his people buy the AIP fertilizer, ferrying them to their respective places of abode without them incurring any penny in transport fare.