Rwanda court to rule on case of Rusesabagina, hero of 'Hotel Rwanda' 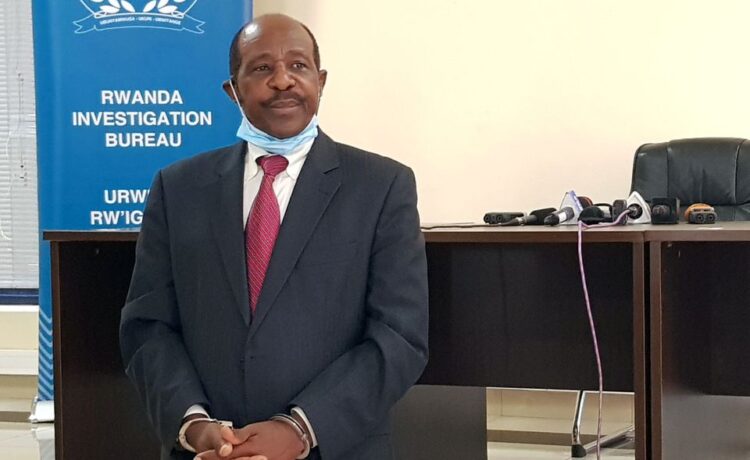 Paul Rusesabagina, the man who was hailed a hero in a Hollywood movie about the country's 1994 genocide is detained and paraded in front of media in handcuffs at the headquarters of Rwanda Investigation Bureau in Kigali, Rwanda August 31, 2020. REUTERS/Clement Uwiringiyimana
0Share

A high-profile case is due for a ruling in Rwanda today. The case involves Paul Rusesabagina, a one-time hotel manager whose story told about the Rwandan 1994 genocide inspired a Hollywood film named ‘Hotel Rwanda’.

Rusesabagina became a global celebrity after the 2004 film “Hotel Rwanda” depicted him risking his life to shelter hundreds as the boss of a luxury hotel in the Rwandan capital Kigali, during the 100-day genocide when Hutu ethnic extremists killed more than 800,000 people, mostly from the Tutsi minority.

The Government in Rwanda’s is accusing him of masterminding terrorism from exile. Prosecutors have sought a life sentence on nine charges, including financing terrorism, arson, taking hostages and forming an armed rebel group which he allegedly directed from exile in the United States.

He is also accused of murder and armed robbery. These charges relate to a series of attacks carried out by the armed National Liberation Front (FLN) in southwestern Rwanda between June and December 2018, during which nine civilians were killed. The FLN is the military wing of the Mouvement Rwandais pour le Changement Democratique, which Rusesabagina co-chairs. In a September 2020 hearing, he admitted to being involved in setting up the FLN. He and his family, however, deny giving support or taking part in any violence or killings.

Rusesabagina could face life in prison if convicted.

Rusesabagina denies all the accusations and says he was kidnapped from Dubai this year to be put on trial. His supporters call the trial a sham, and proof of President Paul Kagame’s ruthless treatment of political opponents. His daughter, Carine Kanimba, has predicted that his father will be convicted. She says she expects him to be found guilty at his trial and has requested the international community to intervene.

Rusesabagina’s trial began in February, six months after he was arrested on arrival in Kigali on a flight from Dubai. He was reportedly kidnapped from Dubai by Rwandan agents who tricked him into boarding a private plane. Former Rwandan Justice Minister Johnston Busingye said the Rwandan government had paid for the flight that brought Rusesabagina to Rwanda.

Human Rights Watch said at the time that his arrest amounted to an enforced disappearance, which it called a serious violation of international law.

Rusesabagina was traveling from the US, where he lives, to Dubai in the United Arab Emirates in August 2020 when he disappeared for several days only to appear in handcuffs in a Kigali court. During the trial, Rusesabagina’s lawyer argued that the court didn’t have the jurisdiction to try Rusesabagina, a Belgian citizen who says he is a victim of illegal rendition.

“If a citizen of Belgium is deported legally to Rwanda, they can be tried locally. But is that what happened? We need to examine how he was arrested because it did not comply with the laws,” Rusesabagina’s lawyer Gatera Gashaba argued in Court, according to AFP.

President Kagame, in early September, defended the trial of Rusesabagina saying the 67-year-old former hotel manager was in court not because he is famous but because of his actions.

The US Congress released a letter sent to Rwanda’s government late last year, which urged the government to allow Rusesabagina to return to his home in Texas on humanitarian grounds, as the 66-year-old suffers from ill health and is a cancer survivor.

It also expressed “grave concern” over the manner in which the Rwanda government “extrajudicially transferred Mr. Rusesabagina from the United Arab Emirates to Rwanda.” But Rwanda has defied the US concerns and calls.

The EU parliament also issued a joint resolution calling for Rusesabagina’s release and condemning his “enforced disappearance, illegal rendition and incommunicado detention.” In turn, Rwandan lawmakers have criticized the EU’s resolution as “imperialistic,” according to online news site in Rwanda. Rwandan parliamentarians and senators said the EU resolution interferes with Rwanda’s sovereignty and undermines the country’s independent judiciary.

A political analyst Phil Clark of SOAS at the University of London has remarked that Rusesabagina become a bit of a YouTube sensation, especially in the Rwandan diaspora, where he often places videos of himself calling for the armed overthrow of the regime in Kigali.

Rusesabagina is an ethnic Hutu and has previously sparked outrage and accusations of promoting ethnic hate speech after he warned of another genocide, “this time by Tutsis against Hutus”. He also claimed that biased traditional courts were overlooking war crimes by Tutsis during the 1994 genocide.