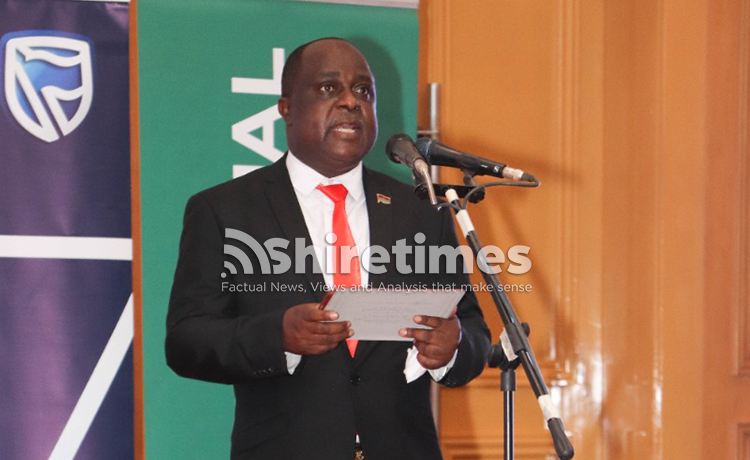 Board Chair for Roads Authority, Joe Ching’ani mercilessly shot at some officers working at the Capitol Hill, the government’s navel of civil service in the country describing them as saboteurs to the regime and the country.

Ching’ani was speaking during a ground-breaking ceremony of the expansion of Kenyatta Road which took place in Malawi’s capital on Tuesday, 31st August 2021.

Malawi’s President, Lazarus Chakwera was commissioning the project which, according to a statement by the Roads Authority board, will be completed in 18 months, thus expected to be complete by February 2023.

In his remarks, Ching’ani lamented that the Roads Authority’s success map is oftentimes ‘suffocated, slowed down and derailed’ by delayed payments to contractors, saying this practice sabotages timely implementation and completion of road projects.

“In this regard, let me, for a while, break tradition today. I will do this by opening up, telling the truth as it is. By doing so, I will offend some quarters and make enemies in the process. Delayed payments to contractors has been one huge headache sabotaging timely implementation and completion of road contracts. As we stand now, we have contractors carrying out massive works who have been waiting for payments for three or so months. We are told money is available at Treasury, but there is an animal at Capital Hill that has sat on the path of payment. We are told it’s a new IFMIS and its taking time to roll out. Here is a technology or system which is supposed to make operations simpler, a system to which people are employed, manning it and getting salaries every month for managing it, but cannot pay road contractors for months,” he said amidst a shocked audience.

On vetting, Ching’ani said sloppy and negligent conduct by Ministries, Departments and Agencies (MDAs) that are charged with the responsibility to run the process of vetting on contracts is hampering progress of Roads Authority contracts.

“Vetting is not bad because it forms an equation of governance. But when vetting takes forever and keeps Roads Authority waiting a month in and a month out, it frustrates progress. Unfortunately, the public who do not know the reality on the ground is quick to blame the Chakwera/Chilima administration as being slow. This is wrong, untrue, and disrespectful to you and the Vice President. It is the vetting MDAs who is at fault”, he said.

“It has to be mentioned that roads construction is season-related and season-dependent. If we lose certain dry months due to unnecessary processes, we lose chunks of milage and progress. We believe MDAs can do better in this respect. A delay by a day we can understand. A delay by a week we my stomach. But a delay of a month or more is not a delay, it could be sabotage,” the all-out Board Chair argued.

During his turn, the State President, who spoke at the end of the event found footing with Roads Authority’s sentiments and related in the following way:

“We cannot fight against truth but for truth, and therefore, whatever we do, and as transparent as we seek to be, we need to be open one with another, and we need to hear not just what we want to hear, but what is needed to be heard because part of mindset change that we are bringing to this country is demanding nothing but the best of ourselves and inspiring nothing but the best in each other”, said President Chakwera who was seemingly impressed with Ching’ani’s presentation.

“I give you permission to be called honorable for now,” Chakwera informally said to Ching’ani whose speech left the monitoring public impressed that the moment of truth-saying without fear or favor has apparently arrived.