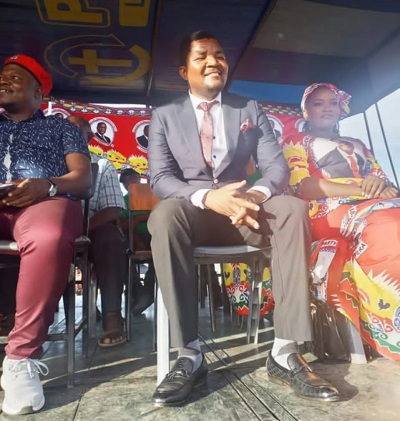 An early bird catches the worm so the adage goes perfectly fits one of the seasoned Musicians in Malawi, Skeffa Chimoto, whom the mother of all parties in Malawi, the Malawi Congress Party (MCP) unveiled as its new catch. The unveiling of the ‘true son of Nkhotakota’ was done in the lakeshore district when party youth director Richard Chimwendo Banda conducted a rally at St Paul’s Primary School in Nkhotakota over the weekend.

Skeffa Chimoto, so it has turned out, is harboring plans to contest under the MCP ticket in 2025 as a Member of Parliament. On his part, Skeffa confirmed that he is being approached by a number of people to contest for the position in 2025 but said he has not yet made up his mind.

“I don’t have anything to tell the people now, it is not yes or no,” said Chimoto, a typical response of Malawian politicians for saying that they have joined politics and that they will run for office with their overt actions.

If he wins in 2025, Skeffa will join a list of musicians who are or have ever been members of Parliament. Lucious Banda was a Member of Parliament until he lost to a little-known Louis Ngalande for his lackluster performance in his constituency.  The definition of a successful musician in politics would be that of Billy Kaunda who became MP in Blantyre and then shifted to his Mzimba Constituency where he also became MP losing in the following term before being elected for the third time now. Kaunda also served as a Deputy Cabinet Minister.